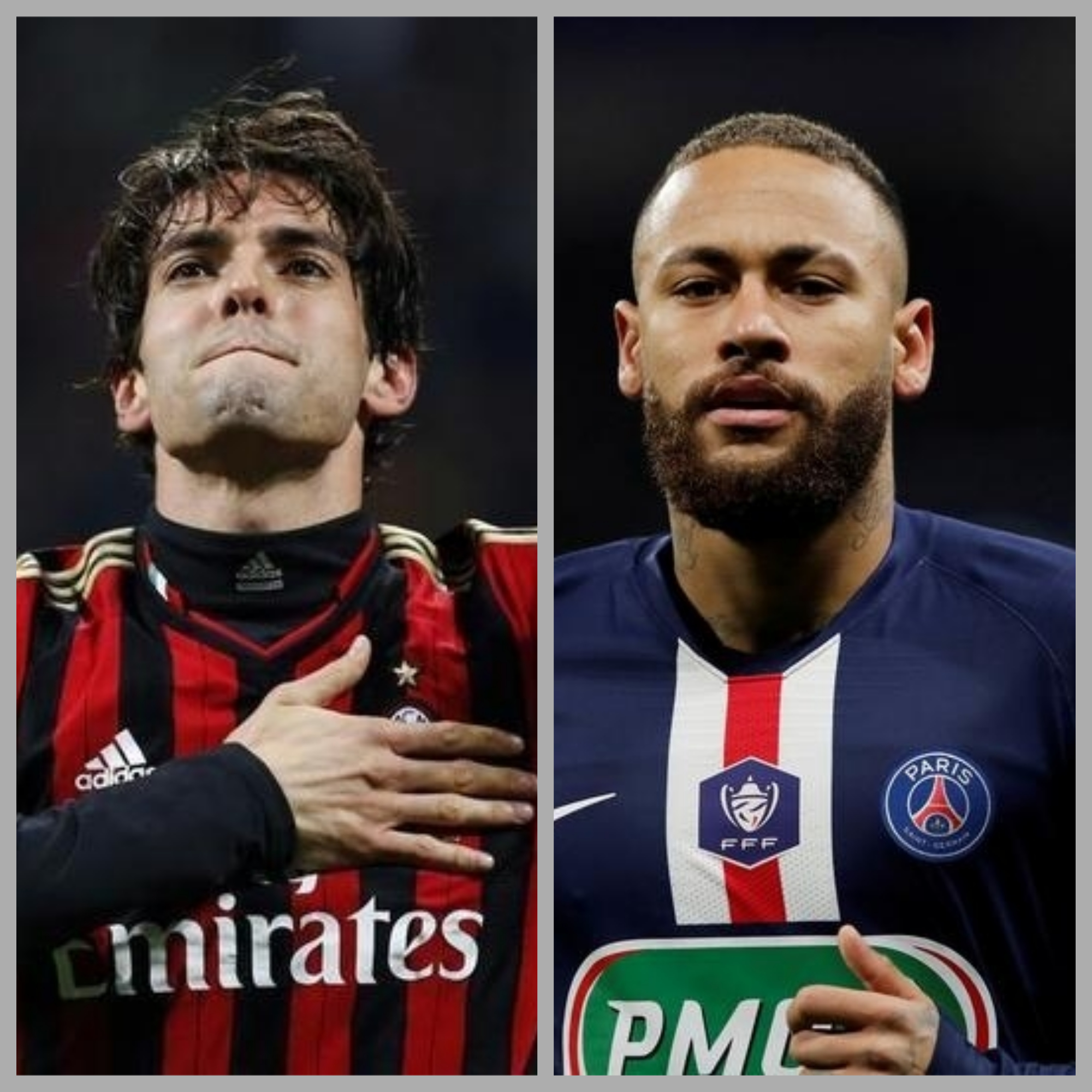 Twitter lit up on Wednesday with the comparison between Brazillian legend, Kaka and his countryman, Paris Saint Germain’s Neymar Jr.

With at least 49.2K  and 60.5K Tweets respectively, the “Kaka vs Neymar” debate is looking like a battle of two generations with some pitching their tents behind the former Barcelona star while others are going for the AC Milan legend.

While the debate continues on the bird app, with some referencing playing styles and dribbles, WuzupNigeria looks at the club and national achievements of these great players who hail from the same country.

Born Ricardo Izecson dos Santos Leite on 22 April 1982 in Gama, Federal District, Brazil. The attacking midfielder began his youth career in 1994 for São Paulo before signing a senior contract in 2001.

He played for São Paulo, AC Milan, Real Madrid, and Orlando City scoring a total of 149 goals after 461 club appearances in the space of 13 years. He was inducted into the A.C. Milan Hall of Fame in 2010.

Kaka scored 29 goals in 92 senior apps for Brazil and won the world cup with the Brazilian national team in the 2002 Korea-Japan tournament, defeating Germany in the final to win their fifth FIFA World Cup title.

He also won two FIFA Confederations Cup with the Samba Boys in 2005 and 2009.

Born Neymar da Silva Santos Júnior on 5 February 1992 in Mogi das Cruzes, Brazil. The skilful Neymar began his youth career at local club Portuguesa Santista before joining Santos in 2003 where he was spotted by Barcelona who signed him in 2013 after five years with the senior team of Santos. He currently plies his trade with French giants Paris Saint-Germain after leaving Barcelona in 2017 and is about to bag a new contract extension.

Neymar has made 288 appearances for all clubs he’s played for so far and has scored at least 175 goals.

Neymar has scored 64 goals in 103 appearances for the Brazilian senior team and won the 2013 FIFA Confederations Cup.

Meanwhile, in the youth level, he won the 2011South American Youth Championship, and a gold and silver medals with Brazil in the 2016 and 2012 summer Olympics respectively.

I just don’t understand the whole thing about cules, that Kaka to crespo champions league final pass against liverpool alone still rings in my head till today. Voted Pass of the century, and Neymar is a better passer, lol. Smh

If you think Kaka was a better footballer than Neymar, what you’re watching is not football, it’s something else.
Only few Brazilians are better than Neymar in history.

Kàkà that turned prime man united defence to farmers, won the balon dor ahead of Messi and Ronaldo.

Kaka was on fire from post world cup after he won it till he went to Madrid..

Kaka had a marvelous Longevity for AC Milan and his First 1 and a half season in Madrid..

Don’t disrespect Kaka all because Neymar can dribble and he has decent G/A contribution.. https://t.co/AaPmnBB3Cz

I love Jesus celebration was the highest then,if you have a corner kick and acmilan gets the ball to Kaka just forget it cos it’s a sure goal,highest box to box counter attacker then ,he’ll score himself from post to post.I remember he ended Samuel’s(Inter) career

Neymar is a role model for those who just want to do step overs and dribble with the ball.

Kaka was gracious with and without the ball, he was sublime on the pitch and off the pitch. He is a legend, icon and a role model for professional football.

Comparing Kaka and Neymar is very weird cause one Kaka was an AM Neymar is a LW, Neymar is more skillful, while Kaka is more technical and intelligent in his play but Kaka had a better career than Neymar so that could be the decider at the end.

Neymar has been a top player and has been consistent for 5/6/7 years now and will be for years to come.

Kaka’s was undoubtedly a quality player in his prime that didn’t last 2-3 seasons plus his decline was so sharp n fast.

But but but but but Neymar is a better footballer than Kaka na. Should be common knowledge, I’m here wondering how some people are arguing.

With the ball and on the ball, Neymar does everything that Kaka does and more.
Don’t allow nostalgia cloud your judgment.

The moment I saw people comparing Neymar to Ricardo Kaka, I just know some young football lovers are at it again. Same Kaka that will finish ten men with ease at the corner side before sending in wicked tap-in pass. Y’all need to go watch Kaka’s video on Youtube.