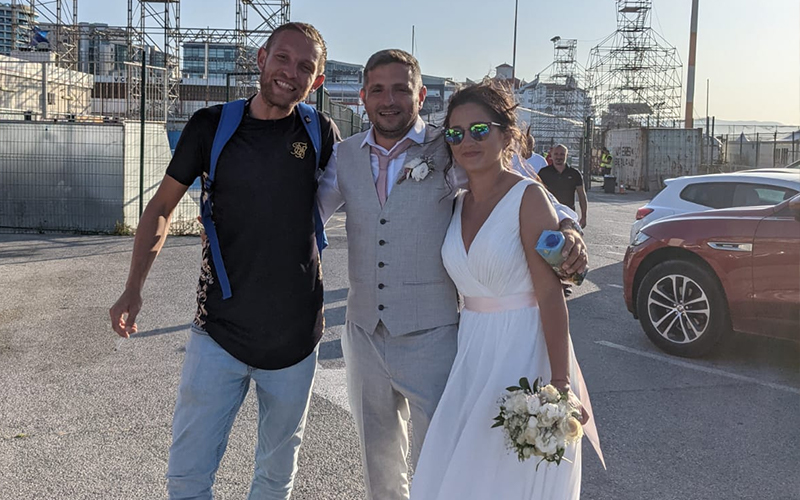 Football fans were left stunned at a Champions League qualifier when a bride and groom a newly-wedded couple turn up in their wedding attires to watch Lincoln Red Imps and CFR Cluj on Tuesday.

CaughtOffSide reports that the bride and groom were still dressed in their wedding suit and gown when they strolled into Gibraltar’s Victoria Stadium.

Both bride and groom were serenaded by fellow fans as they walked to their seats during the first half, before the newlyweds mingled with punters outside the ground after full-time, the report added.

One fan, Ben Horlock, captured a video of the groom, a Romanian man called Stefan, clearly enjoying his moment in the limelight.

Horlock shared the footage on Twitter alongside the caption: “When you’re getting married at 3 but the Champions League is on at 6. Priorities.”

When you’re getting married at 3 but the Champions League is on at 6. Priorities. 👏⚽💒#UCL pic.twitter.com/bHICYKT4gi

“It was a pretty good game in terms of quality. But the real highlight of the night was seeing the bride and groom, dressed in all their finery, lapping up the attention of a lively crowd,” QPR fan Horlock later said.

“The groom nipped out of the stadium at half time and returned with two fistfuls of crisps from the local garage, including at least three bags of cheesy balls… If that isn’t a bride’s dream wedding day, I don’t know what is!”

Horlock, who works in Gibraltar and went to the game as a neutral with a £5 ticket, added: “I chatted with the groom, Stefan, after the match and even got a selfie.

“He seemed like a really top bloke and they both looked really happy. Stefan told me he was a Steaua Bucharest fan though, so he wanted Cluj to lose. I guess you can’t have it all. He got cheesy balls and to marry the love of his life. Two out of three ain’t bad!”

Meanwhile, the gamed ended 2-1 in favour of Romanian side, Cluj, as they take a first-leg lead thanks to a brace from Marco Rosa Blanco and Gabriel Debeljuh.