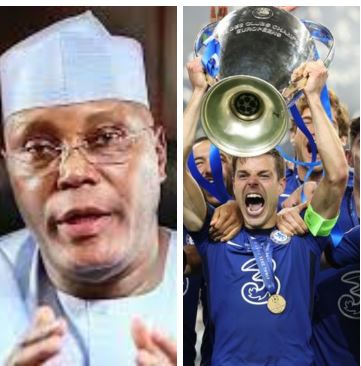 Nigerians on Saturday slammed former vice president, Atiku Abubakar, for publicly congratulating his son over the victory of Chelsea at the Champions League final, an action they deemed insensitive.

The aggrieved tweep who accused of being insensitive, also wondered why a public figure like Atiku should be shying away from discussing issues of insecurity, herdsmen killing and the controversy surrounding Minister of Communications and Digital Economy, Dr Isa Pantami.

The politician had called out his son, Alhaji Mustapha Abu Bakr, who is a die-hard fan of Chelsea via his official Twitter handle on Saturday.

What appeared like a harmless tweet momentarily degenerated into a verbal assault as netizens repeatedly knocked the politician over his perennial silence especially on the Pantami debate.

A certain @gentlelink who described himself as a political scientist threw the first salvo.

“U can tweet abt football but silent abt the genocide in benue,” he said.

The tweet was followed by another from Precious Uwaezuoke, an educationist, who disclosed that she knows leaders can afford to discuss football now and campaign promises later especially when election beckons in 2023.

“The proposed leaders enjoy to talk abt football than a way forward for the country? 2023 you’ll now become a part of the country and promise us Israel, abi” she stated.

Another netizen, Uche Udo, was not moved by all the expletives and verbal assault.

He was more interested in knowing whether Atiku watched the match with electricity, generator or solar power.

“Sir, how did you manage to watch the match, is it with solar or generator?” he queried.

A handful of Chelsea fans, however, came to the rescue of former vice president’s.

One of such is @ekpemanduchukwu who felt Nigerians are not directing their anger at the proper channels.

“Go and tell your president. What concerns Atiku and killings in Benue? Is he the Governor, president or coas? Let me finish my Chelsea victory celebrations before less important issues like NIGERIA biko. UP CHELSEA.”

On the other hand, Aikekodion Lucky, a concerned netizen also felt celebrating Chelsea has nothing to do with an attack on his personality.

“I join Atiku to congratulate all Chelsea fans home and oversea on their  champion league victory tonight. But  l am not a fan of Chelsea,” he tweeted.