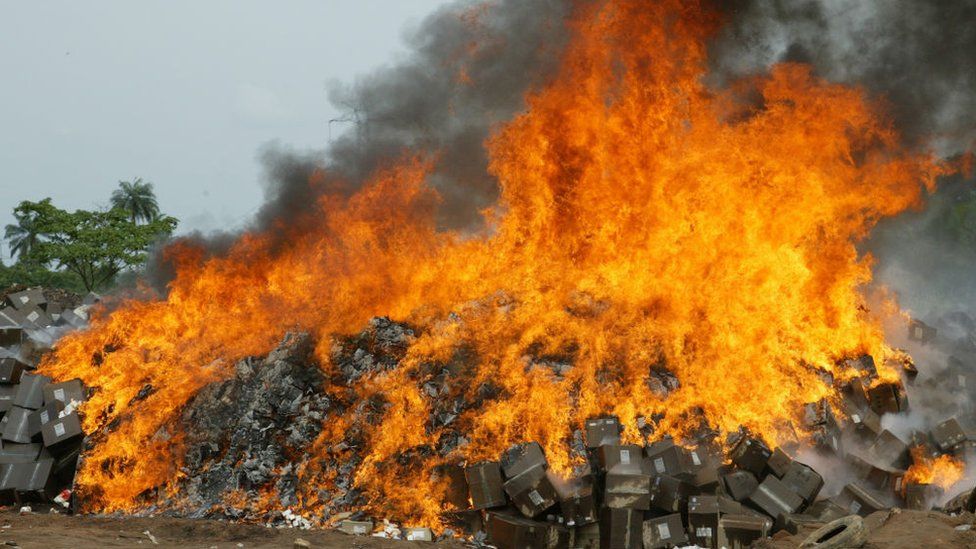 To safeguard the health of Nigerians, the National Agency for Food and Drug Administration and Control on Sunday destroyed a huge stock of unwholesome processed food, falsified medicines and dangerous cosmetics in the North East.

According to NAFDAC Director-General, Prof. Mojisola Adeyeye who was represented by Bauchi State Coordinator, Mrs Dayilim Josephine, the estimated street value of the destroyed products was N515, 732,587.

In a statement issued to WuzupNigeria by Sayo Akintola, NAFDAC Resident Media Consultant, Adeyeye reiterated that the exercise was in line with one of the agency’s strategies aimed at eradicating the reintroduction of fake drugs and other seized, spurious and unwholesome regulated products from the market.

The products destroyed included various quantities of medicines such as antibiotics, herbal remedies, psychoactive, and antidiabetic.

NAFDAC also set ablaze cosmetics like creams, pomade, and chemicals such as fake insecticides and fertilizers.

Adeyeye who expressed relief that the destroyed items did not find their way to the markets, disclosed that the products were seized from Gombe, Borno, Yobe, Adamawa, Bauchi and Taraba.

“A total of 240.15 tons were received from the North-Eastern states and additional 40 tons from GSK Pharma which were voluntarily handed over and destroyed. The heap of items received was doused with fuel and lighted with fire at noon on Saturday.

‘’The public must be on the lookout for those spurious and counterfeit vaccines and other regulated products’’, she said, adding that NAFDAC on its own part will ensure continuous surveillance of those products ‘’and we shall continue to enforce the regulations governing these products in Nigeria.

“We also commended the collaborative efforts of sister agencies like SON, NDLEA, DSS amongst others towards the realization of NAFDAC’s mandate in ridding the nation of counterfeit products that are inimical to the health and wellbeing of the Nigerian populace,” she said.

Super TV CEO: I stabbed him twice in the neck – Chidinma