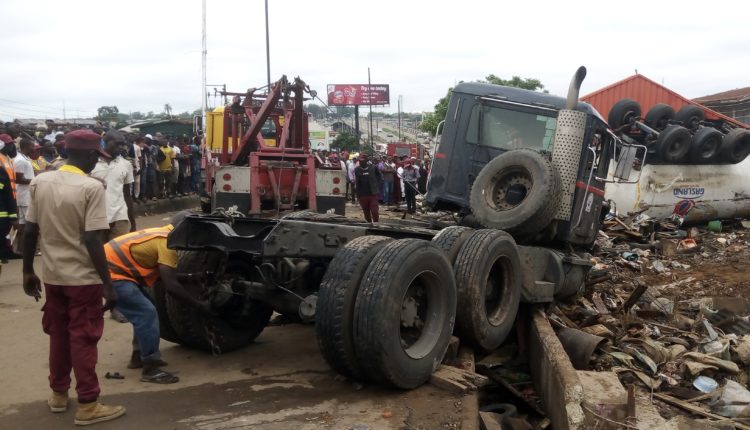 An undisclosed number of persons comprising commercial motorcyclists and traders lost their lives on Sunday morning when a tanker conveying fuel rammed into the popular Bode market in Ibadan, Oyo State capital.

An eyewitness who craved anonymity told our correspondent that the tanker, which was coming from Idi Arere axis lost control and crushed many traders, a tricycle and a commercial motorcycle.

Some of the traders, who were at the scene when the accident occurred disclosed that it occurred around 8.30am, adding that the loud impact of the gas tanker when it rammed into a shopping complex inside the market caused apprehension.

Tribune reported that both the market and the dual carriage expressway from Beere to Idi Arere and Bode before the flyover bridge have been closed to traffic by a team of officials from the Federal Fire Service, Federal Roads Safety Corps (FRSC) and the Nigeria Police.

Although details of the accident were still sketchy as of the time of filing this report, the Oyo State Commander of the Federal Roads Safety Corps (FRSC), Mrs Uche Winifred Chukwura confirmed the accident.

However, she stated that “it is that the accident occurred this morning at Bode market, but our people are still there evacuating the debris and casualty. For now, we cannot give a specific figure of the casualty. I would get back to you later on the number of people that died in the accident.”

I can’t flee the country like you, Asari Dokubo taunts Nnamdi Kanu