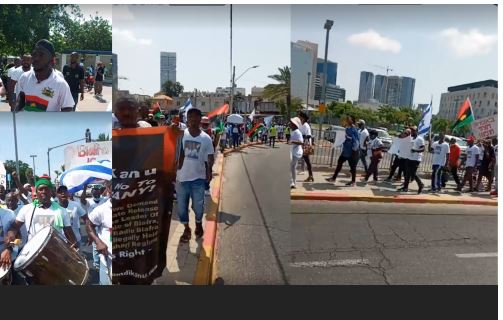 Hundreds of Nigerians living in Israel staged a protest rally in Tel Aviv on Tuesday morning to demand the release of self-styled Biafran leader, Nnamdi Kanu, by the Federal Government.

Chanting “Free Nnamdi Kanu” solidarity songs, the demonstrators marched from the Phillipino Garden and headed for the British Embassy on Hayakon Street in Tel Aviv.

According to a viral live video posted on Facebook, the protesters were seen spotting customised T-Shirts and flying Biafran flags.

According to SaharaReporters, a similar demonstration was carried out on July 1 by Nigerians living in London, United Kingdom.

Since the arrest of Kanu on June 18, a handful of civil groups and individuals have called for his release within and outside the country.

Kanu’s legal counsel has also accused the Nigerian government of “state kidnapping” and said he was abducted by Nigerian officials in Kenya and taken to Nigeria against his will.

Related Topics:demonstratorsFeaturedFree Nnamdi Kanu
Up Next