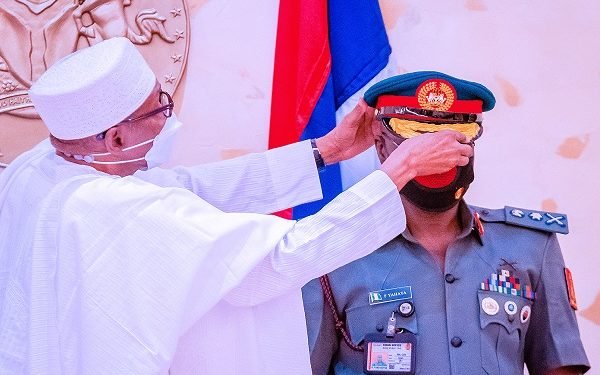 The President, Muhammadu Buhari (retd) has decorated the new Chief of Army Staff, Major General Faruk Yahaya with a Lieutenant-General rank at the Presidential Villa, Abuja.

The ceremony also has Vice-President, Yemi Osinbajo and key government officials in attendance.

Yahaya was appointed on May 27 to replace Ibrahim Attahiru who died in a plane crash in Kaduna.

Also present at the brief ceremony were some members of the Federal Executive Council, which included Chief of Staff to the President, Professor Ibrahim Gambari; National Security Adviser (NSA), Major-General Babagana Monguno; Minister of Defense, Major-General Bashir Salihi Magashi; Chairman of the Senate Committee on Defense, Senator Ali Ndume; and wife of the Chief of Army Staff, Hajiya Salamatu Yahaya, among others.

UPDATED: Minister who slumped at event discharged from Bauchi hospital