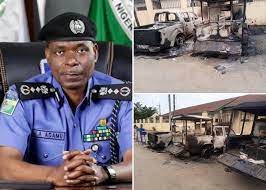 Police authorities have ordered operatives to take up arms and be ruthless in its approach against members of the outlawed Independent People of Biafra.

The Inspector General of Police, Muhammed Adamu,  gave the directive when he visited the scenes of yesterday’s mayhem at Imo Police Command headquarters and Owerri Correctional Service on Tuesday.

Recall that both facilities were bombed after gunmen invaded the correctional centre freeing over 1,844 inmates in the process.

Adamu ordered the police officers to deploy their weapons against the IPOB members and ensure that they are crushed to the last man.