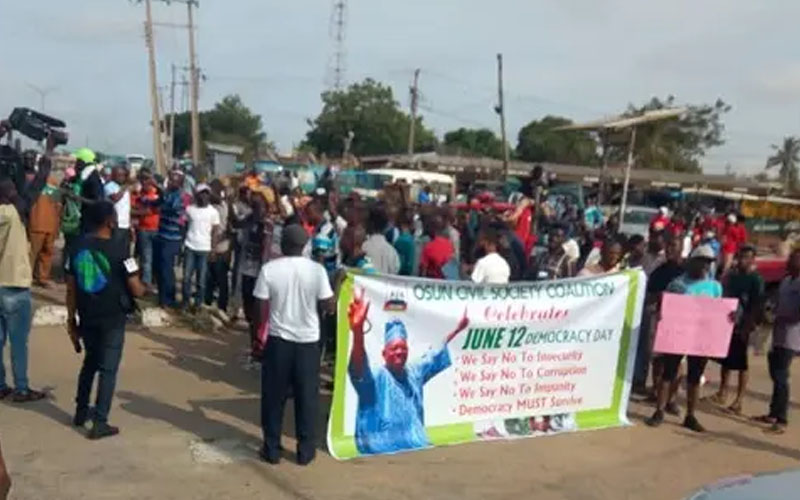 A group of protesters allegedly led by the ‘Take it Back Movement’ of former presidential candidate, Omoyele Sowore, disrupted a Democracy Day lecture organised by the state government in collaboration with the Civil Societies Coalition in Osogbo, Osun State capital, on Saturday.

The group had earlier converged on Oke Fia Junction, Osogbo where the protest commenced at about 8:30am under the supervision of operatives from the Department of State Services, Osun Amotekun Corps and state police command.

While the protesters led by Comrade Waheed Saka, later moved towards Alekuwodo Area singing solidary songs, some other leaders of the protest told participants to move towards the venue of the lecture.

Division however occurred after a group of protesters led by one Victor Lijofi, the state secretary of ‘Take It Back Movement,’ declined and stayed back at Oke Fia, from where they moved round major streets in protest.

“Free all detained activists* Reverse electricity tariff,” “Revert fuel price and stop further increment,” the demonstrators also demanded the resignation of the President, Major General Mohammadu Buhari (retd.), over his inability to deal with myriads of challenges facing the country.

Business activities were totally paralysed in especially Osogbo, as people stayed indoors in fear of breakdown of law and order.

All major roads in the state capital also witnessed light traffic for the better part of Saturday, while security operatives were stationed at strategic points across that metropolis.

Related Topics:Democracy DayJune 12
Up Next