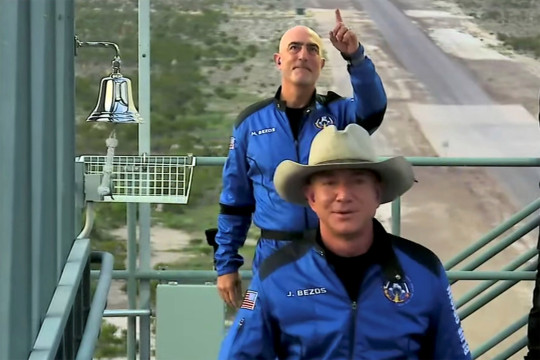 Accompanying Bezos were his brother, Mark Bezos, and 82-year-old female pilot Wally Funk, an avid aviator who trained with NASA to go to space in 1961.

Blue Origin also auctioned off a seat on the flight to a mystery bidder, who paid $28 million.

That bidder dropped out due to a ‘scheduling conflict’ so the spot was taken by 18-year-old, Oliver Daemen.

The New Shepard rocket named after US astronaut, Alan Shepard, landed near launchpad Launch Site One, in Texas, shortly after the capsule containing Bezos detached at 250,000ft (76km).

The six-person capsule, after experiencing microgravity at the peak of the flight, then landed with parachutes in the desert.

Related Topics:Amazonjeff bezos
Up Next