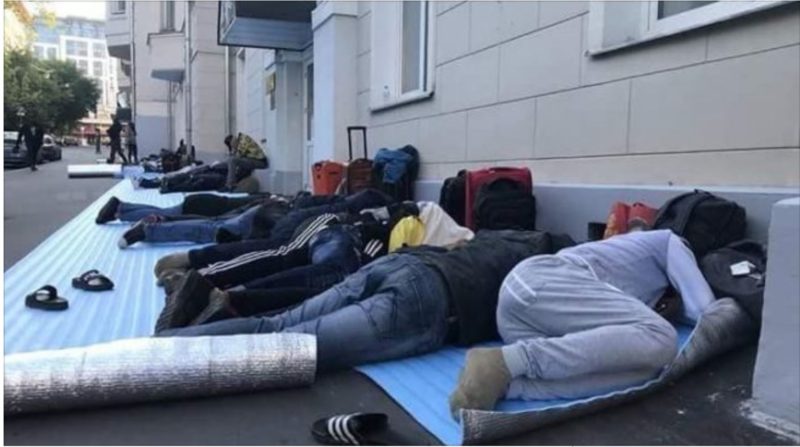 Some angry Nigerians on twitter have lambasted President Buhari for announcing that it will commence the process of repatriating some Nigerians who travelled to Russia for the FIFA 2018 World Cup and got stranded after the competition.

There have been reports of scores of Nigerians who travelled to the country for the World Cup but were unable to leave, having discovered that they were swindled.

“President @MBuhari has directed the Minister of Foreign Affairs, @GeoffreyOnyeama and Minister of State, Aviation, Sen. @hadisirika, to commence the process of repatriating Nigerians who travelled to Russia for the FIFA 2018 World Cup and got stranded after the competition.

“The Nigerian football fans got stranded in the country following the activities of some unscrupulous travel agents who cancelled their return tickets and abandoned them to their fate.

“The Minister of Foreign Affairs and the Minister of Aviation have in compliance with the President’s directive taken the necessary actions to bring the Nigerians back.

“The Presidential directive is in line with the policy of the current administration to ensure the welfare of all Nigerians in every part of the world.

“It would be recalled that the President Buhari administration has on several occasions ensured the repatriation of Nigerians from foreign countries like Libya and other conflict zones”.

Meanwhile, Governor Akinwunmi Ambode of Lagos State has paid for the return flight of 50 Nigerians stranded in Russia.

Nnamdi Odimegwu a motivational speaker confirming the news via his Instagram page said he was in the company of the governor when he extended the gesture.

However, some Nigerian’s had accused Buhari of responding late to the crises in Russia adding that Governor Ambode had graciously done the needful.

Some also praised Buhari for taking care of the affected Nigerians.

The lackadaisical attitude of your govt is out of this world. Governance is not rocket science, learn from world leaders. Something will happen and it will take 1001hours to get official statement from govt? Lagos state governor has shown leadership.

Ambode is doing that… Devicing another means to embezzle funds; shame on u.

Why is this coming late when the Lagos state governor @AkinwunmiAmbode had already made it if not completed the repatriation of these fellas back to Nigeria.
However, more seriously is or are poor Nigerians seeking financial aids to help cater for their medical illnesses.

It’s too late. Gov Ambode has already done that.

Ambode brought them back already

Committees will be set up as a result of this directive and delegations will be sent on “fact finding” missions. 🤦🏾‍♂️

Stupid talk from you. Is it the government that sent them to Russia? Criticism must be with sense,not foolishness

Our Gov @AkinwunmiAmbode of Lagos state has already taken the initiative and assisted in getting the people back to Nigeria.
Federal government must acknowledge & applaud this. Also, you must reimburse Lagos state for the expenses we have incurred in this humanitarian act.

Tears rolling on my cheeks, indeed Nigeria is blessed to have a wonderful leader…. 30years in Nigeria and I have never shed tears for my country until today.

BUHARI is magnanimous to his ppl including his adversaries. These Nigerians tot they cd escape thru Russia to Europe, lazy youths & adults . We will salvage our mess together my ppl. Thank yu Baba BUHARI , bring them back to learn how to work and make Nigeria look like abroad.

BUHARI is magnanimous to his ppl including his adversaries. These Nigerians tot they cd escape thru Russia to Europe, lazy youths & adults . We will salvage our mess together my ppl. Thank yu Baba BUHARI , bring them back to learn how to work and make Nigeria look like abroad.

You’re a shame to Nigeria @APCNigeria @GarShehu @MBuhari
This is the 1st time we’re hearing this.

It’s an embarrassment. We can’t wait to sack you @GarShehu and your paymaster @MBuhari in 2019

Not a Political Campaign but just appreciating a good and kind gesture by one of our noble Politicians in Nigeria. The story goes thus: I had a pick up arrangement today at the airport in Moscow and had a rare privilege of meeting his excellency, the governor of Lagos State; the most populous and commercial Hub of Nigeria. I quickly introduced myself while I waited for my pick up arrangement to come out. We had a small chat and exchanged knowledge and wisdom while I waited. He bade me farewell as his pick up arrangement had arrived. After a few minutes, my pick up arrived as well so we set out to the car park. As soon as we came out of the airport, I saw a crowd of over 50 Nigerians who had been stranded at the airport for almost 10-15 days now. And in their middle was this same man, His excellency , Governor Ambode. As soon as he sighted me, he quickly called my attention to assist. It was a pathetic state and a lot of words both pleasant and unpleasant were being exchanged. (Not apportioning blames on anyone ) Then his Excellency did something that amazed me. He showed solidarity and quickly pledged to send all 50 Stranded Nigerians home and assigned me to oversea the transfers and procurement of new tickets to send them home. As I type this, 19 out of this 50 are already on air to Lagos Nigeria, the remaining 31 are leaving this evening. His excellency also fed them all as he gave them cash to eat while they waited for their tickets to fly home. I am only writing this to express my gratitude to a man that has shown that not all politicians are the same. I am well aware that NFF Officials and some other Senior Government or well to do Nigerians are aware of the situation on ground but are yet to be of help. Kindly help as much as you can. Nigeria will only be built or destroyed by Nigerians. The integrity of our Nation is at stake. Follow this same example; If you have the well withal. DISCLAIMER : THIS IS NOT A CAMPAIGN BUT A SIMPLE SHOW OF LIGHT IN THE MIDST OF DARKNESS. Akinwunmi Ambode

HE WILL MINISTER TO THE BARREN, SICK & JOBLESS! Kumuyi hosts ‘Night Of Divine Increase’ on Thursday

STOP GLORIFYING THEM! ‘Single moms are generally losers, they have big possibility of raising criminals and sluts’