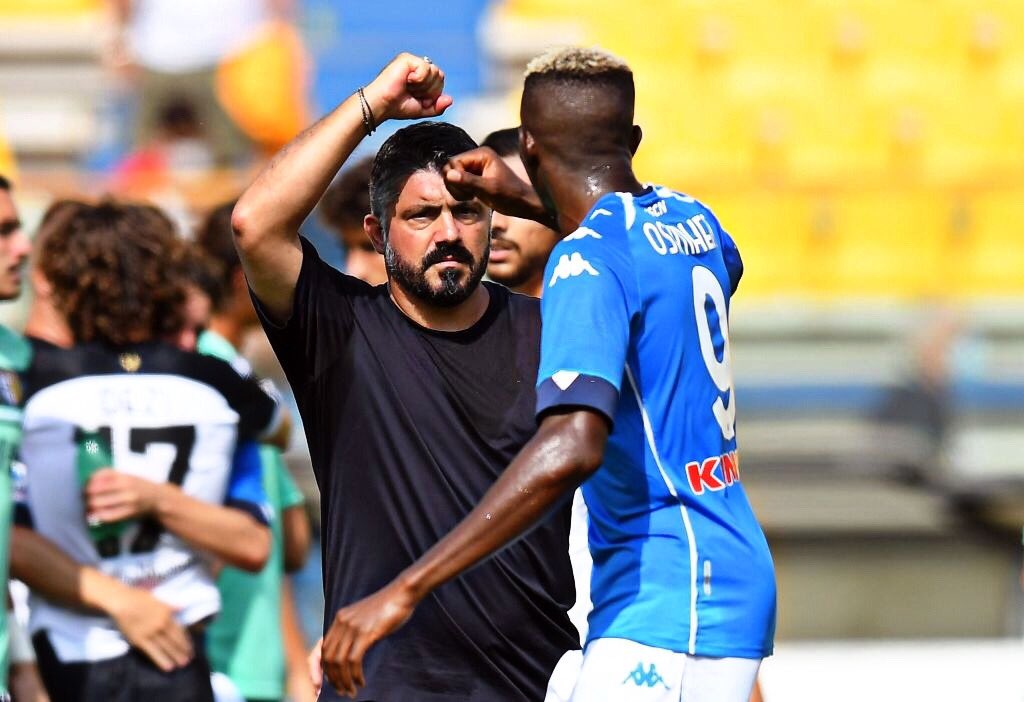 The Italian sporting media has berated Napoli manager, Gennaro Gattuso, for leaving out Victor Osimhen in Wednesday’s 2-1 loss to Juventus.

Osimhen, who was on target last Saturday against Crotone, came off the bench to cause a lot of trouble for Juventus and win a penalty that helped Napoli score their only goal of the game.

Cristiano Ronaldo opened the scoring for Juventus in the 13th-minute before Paulo Dybala doubled the lead on 73 minutes.

Osimhen was introduced for Diego Demme in the 54th minute, and he was brought down by Giorgio Chiellini in the penalty area in the 90th-minute.

Lorenzo Insigne converted from the charity spot to make the final minutes tense for Juventus, but the reigning Serie A champions held on for the maximum points which ended Napoli’s six-game unbeaten streak in the Italian top-flight.

Osimhen was the best Napoli player on parade in Wednesday’s game and Thursday’s edition of the Gazzetta dello Sport was most critical of former AC Milan player and coach Gattuso after he picked Dries Mertens ahead of Osimhen for the big match against Juventus.

The respected sports daily stated that Gattuso was wrong to have deployed the 33-year-old Belgian and not Osimhen from the first minute, adding that the Nigerian, from the moment of his entry, was much more incisive, creating several headaches for Juventus centre-backs Giorgio Chiellini and Matthijs de Ligt, countering their physicality and getting the penalty that gave the Parthenopeans a chance at restoring parity with the Old Lady of Italian football.

“The movement of the striker disoriented the defence several times and in the final seconds, it was he who gave (Juventus goalkeeper Gigi) Buffon the chills. As long as Gattuso kept him on the bench, Napoli’s attacking phase was fragile. Osimhen’s inclusion has allowed Napoli to have a point of reference in the opposing area and his presence has opened some passage for the insertions of (Lorenzo) Insigne and Mertens.”

Gazzetta dello Sport wasn’t the only one critical of Gattuso, and full of praise for Osimhen, as another respected Italian sport daily, Corriere dello Sport, also showered accolades on the Super Eagles striker.

“Osimhen settled next to Mertens, he went wherever the ball went, he disturbed (challenging them in their field, the physicality) Chiellini and De Ligt who, before him, had had an easy life against Mertens,” wrote Corriere dello Sport on Thursday.

Osimhen, 22, has not had the best of seasons with Napoli, scoring just four times in 21 matches in all competitions, but on each of those occasions, he has found the back of the net Napoli have gone on to win (4-1 against Atalanta in October, 1-0 at Bologna in November, 3-1 against Bologna in March, and 4-3 against Crotone in April).

Players to wear ‘black armbands’ in honour of Prince Philip