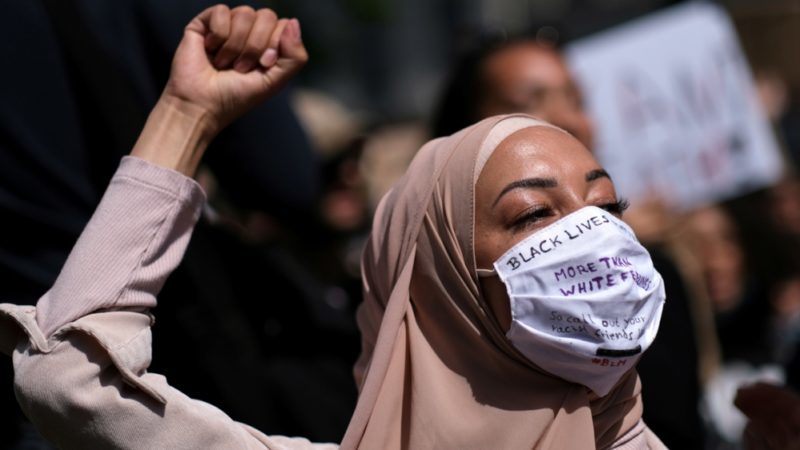 People pouring into the streets, in city after city. White, black, brown. All united. Determined to make their voices heard. Undeterred in the face of authoritarianism. Despite the cruelty and indifference of America’s governing classes. Despite the tear gas and police brutality. Despite the demagogue threatening martial law.

All of that leads me to ask a tiny question. Is this the American Spring?

Surely you remember the Arab Spring. When Arabs poured into the streets, too, to try and reclaim their freedom, from a generation of autocrats. At this juncture, by the way, grad-school nitpickers will warn — “but the Arab Spring backfired!” Indeed. I’ll come to that. Maybe the more sensible see the simple parallel I’m trying to draw: a mass movement for social transformation, in a deeply broken, divided, fractured society, where life is simply falling apart.

Is such a thing being born in America, at precisely this moment?

If there were to be such a thing as the American Spring — a movement for social transformation, long overdue — I think that it would need to meet three criteria.

First, Americans would need to wake up to the fact that they now enjoy some of the lowest living standards in the rich world — and uniquely low living standards, period. America now has more in common with a nation like Russia than say Canada, France, or Germany. Autocracy. What I call the trifecta of ruin: falling incomes, savings, and happiness. Life seems to have come apart at the seams. 80% of Americans live right at the edge of perpetual ruin, and that number’s rising.

An American Spring would need to demand a new social contract, a New Deal, a functioning modern society. It would recognize that America is unique in the world. All that money never led it to become a functioning society. Why else do Americans have to choose between healthcare and their homes? Why else are people being beaten on the streets? Americans would have to begin to really reckon with the fact that their society never evolved — but instead grew the wrong way: into a twisted caricature of what it means to be a modern democracy.

I think there’s more than a hint of that in this spreading wave of protest. Americans do seem to be getting that their society has failed. That’s OK. France has had many Republics. America’s still on the second, or third, maybe. It’s time for another one. A failed society doesn’t mean a nation has to go on failing forever. It can reinvent itself.

Second, Americans would need to understand that the reason their society failed is because it underinvested in everything that really matters, while over-investing and mal-investing in things that didn’t. Growing cries of “defund the police!” point to just such an epiphany happening. What did American put its money and resources in? Not any of the following: healthcare, retirement, education, pensions, childcare, elderly care, and so forth. As a result, Americans now live without those things. Meanwhile, police forces have become paramilitaries, and the military has built the perfect laser-guided drone-operated killing machine.

There’s another way to put that. America invested in the stuff you’d expect of a society of people which hated one another. Guns. Bombs. Policing. Men in body armour carrying grenades. Why is it, anyways, that the local police department now has enough ordnance to take over a small country? Because Americans are people who fear each other. Or they have been, anyways. People who genuinely hate each other enough to say: “I’ll never invest in those dirty, lazy people’s healthcare, education, retirement — but I will put money into policing them away from my neighbourhood, with as much brutality as it takes!”

The third thing that Americans would need to understand is that race is at the heart of America’s failed social contract. Why has America over-invested in the stuff of violence and hate — policing, guns, bombs, etc — while massively, epically underinvesting in the stuff of better lives, like healthcare, retirement, education, and so forth? Because of the toxic legacy of racism. “I won’t pay for their schools, education, healthcare, retirement!!” We all know who they is: minorities, blacks, browns, and so on. And we all know who’s speaking those words, too: the white American.

What the white American must begin to understand is that this logic has only ended in a perverse place. By denying us healthcare, education, retirement, and so forth — public goods — the white American has only ended up denying them to himself and his own kids and grandkids as well. And in fact, the statistics say that white Americans are the one suffering most as a consequence of that — they’re the ones who have the fastest falling life expectancies, incomes, and so on.

Their own ignorance, fear, stupidity — all born of racism — has come back to wallop them, to shred their own living standards, to reduce their society to rubble.

That’s not to say, by the way, that black and brown people suffer any less, in human terms. Their incomes and health never reached the levels of whites, by a very long way. I’m simply pointing out that there are no real winners in America’s failed society. Racism has produced a failed society for whites, too, one where they are live poorer, shorter, meaner, harder lives by the year, and so does everyone else.

White Americans accede to this fatal bargain because they get, still, a kind of payoff: they stay at the top. They have all the best jobs, all the best homes, all the best neighbourhood, and so forth. For many of them, for the last few decades, the logic has been: it’s better to be still on top in a declining society, than rising in a prosperous one. At least that way, your supremacy and superiority are preserved. You feel good. Your ego is mollified, and your world doesn’t change. Sure, I don’t have healthcare — but at least they don’t, either. And they need it more than me.

I can tough it out. But what happens when that foolish choice runs its course?

By now, the results of that kind of fatal logic have been, again, that life for white Americans has reached a point of collapse, too. That logic has now run its course. Is it really worth being on top of a society like America, anymore? When even your own life is getting shorter, poorer, and more hopeless by the year? What good is it standing atop a pile of rubble? Sure, you can go on exploiting black and brown people — if you never want to have a better life again, either, and be ruled by Trump and his army of American Idiots meanwhile, too.

If Americans had those three epiphanies, then they’d do something truly remarkable. They’d back a social contract like Europe’s, Canada’s, or New Zealand’s. One where public goods are made available to all, expansively. They’d borrow whatever they needed to fund such a society, because in the long run, it’d be like borrowing to pay for any other investment with spectacular returns. As Americans — all kinds of Americans — began to live longer, richer, healthier, saner lives, the social surplus would expand dramatically, and America would become a genuinely rich society, instead of a rich country of poor people.

And, of course, the brutality and violence suffered by minorities would decline, too — meaning that the norms of a true democracy would begin to emerge: gentleness, trust, empathy, warmth, instead of the cruelty, rage, brutality, and violence which Americans are famous for the world over now.

Now, you might say: “that’s exactly what’s happening! And I know that because I’m just that kind of person!” Perhaps you are, noble and wise reader, perhaps you are. But let me add a note of caution.

White Americans are doing a very, very good job of becoming visible “allies”, as the wokerati like to say. Yes, they’re at the protests in a way like never before. Yes, they finally seem to be standing up for minorities. Maybe, just maybe, they’re even getting the points above — how racism led to a failed society for all, and that all this is about much more than police brutality, but about how a society drove itself into the ground, and then off a cliff.

All that is true.

Will all that change after this wave of protests? Will Trump’s support among white Americans finally — finally — fall to a minority position, after the camps, cages, bans, raids, and other accoutrements of fascism…now that soldiers are on the white streets, too?

Social change is hard. Very, very hard. It doesn’t happen easily, often, or simply. The Arab Spring, too, backfired. After a year or so of protests, dictators cracked down even more brutally. Arabs never really won their freedom. They are still right where they are.

The average American will scoff at that, and say: “LOL! Arabs? You’re comparing me to…Arabs? I’m an American! We’re better than them!!”

Are you? Then why, my friend, are you on the streets, protesting against a brutal regime, which has made the White House a fortress, who champions shooting people in the streets, and putting children in cages? America is every bit the newest member of the league of Arab failed states — and those around the world, too.

Let’s hope, then, that Americans begin to have the epiphanies above. Not just as a tiny minority of whites, who become better “allies” to minorities — a phrase I don’t like, because this isn’t a war. What is it? A peace, my friends, a peace. America must finally become to learn a nation at peace. That’s what a true democracy really is. A place where people can peacefully invest in each other’s betterment, over and over again, until it becomes a way of life, and norms of warmth, gentleness, cooperation, and friendship emerge — instead of a place still simmering with resentment, hate, rage, and fear, which spill over, time and again, into violence, causing a vicious cycle of division, underinvestment, and poverty, from which there seems to be no escape.

I don’t know the answer to the question. I have my doubts, as you can probably tell.

So let me ask you: is this, finally, at long last, something like the American Spring?

Why is Egypt running scared of Okonjo-Iweala in the race for WTO DG? BY Reuben Abati

An open market for rapists and outlaws BY Levi Obijiofor