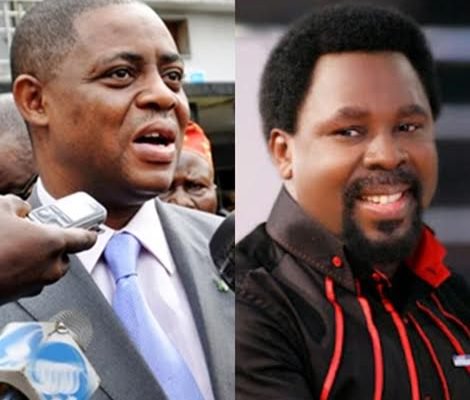 Former Minister of Aviation, Femi Fani-Kayode has called on the Federal Government to carry out an investigation into the collapsed building of the Synagogue Church of All Nations, SCOAN, presided over by Prophet TB Joshua.

The building is believed to have collapsed in 2014 as a result of a flying object.

About 115 people were killed during the collapse of the building.

Femi Fani-Kayode has now called for an investigation and also advised the National Assembly to open a committee over the incident.

He tweeted: “On September 12th 2014, 6 years ago today, 115 people were killed when a flying device brought down a building in the premises of Prophet T.B. Joshua’s Synagogue Church of All Nations (SCOAN) in Lagos, Nigeria. This was an unprecedented and premeditated act of terror yet up until today no-one has been brought to book for it and the authorities have swept the entire event under the carpet.

“Worse of all is the perfidious, self-serving and insidious attempt by the relevant authorities to make the whole thing look as if it was nothing but a terrible accident that took place as a result of a faulty foundation for reasons best known to themselves.

“We remember the Christian martyrs that were killed on that day and we continue to celebrate their lives, share the pain of their families and Church and mourn them.

“My heart goes out to my friend & brother Prophet T.B. Joshua, to SCOAN itself and to the families of all those that were so cruelly murdered on that day. I call on the FG to establish a Commission of Inquiry to investigate this matter and I call on the National Assembly to commence a public hearing to establish all the relevant facts.

“The only way we can honor the dead is to bring the full force of the law to bear on those that murdered them. May the souls of the great martyrs that were killed on that day continue to rest in peace and may God expose and bring to justice those that were behind this hideous crime and barbaric act. NEVER AGAIN.”