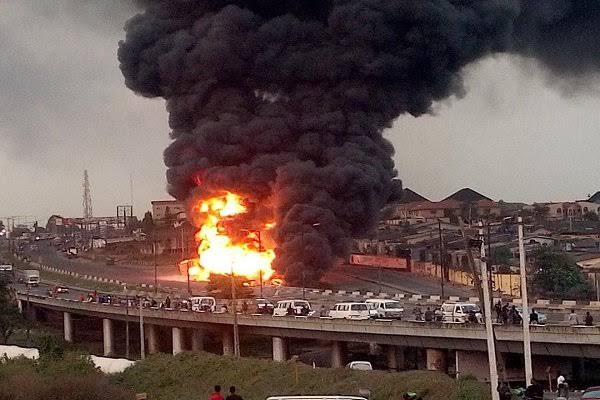 Nigerians have demanded an inquiry into the frequent road mishaps that occured on the popular Otedola bridge along the Lagos Ibadan expressway.

WuzupNigeria on Saturday reported another explosion on the bridge involving a tanker filled with PMS and a truck-laden with a container.

Consequently, the accident has led to a gridlock, as is the norm on the bridge during similar occurrence,  leading to suspicion that something sinister could be spurring those accidents.

A Twitter user alleged that he was forced to get an access card through an estate he doesn’t live just to avoid the dreaded bridge.

“I don’t live in Omole Phase 2 but i had to buy their estate sticker so i can pass through instead of plying through that blood sucking Otedola bridge. I avoid that bridge with every power in me,” he said.

Another user, @WaleAdetono wondered when the mystery behind the reccurring accidents on the Otedola bridge would be unravelled.

He wrote: “Once you see Otedola Bridge trending, just know that the usual has happened. How soon would they unravel the mystery on that route? It’s worrisome.”

@Uncle_Ajala also echoed the same comment and maintained that there’s a mystery about the bridge.

“There’s something about that bridge that’s scary, with this accident, the traffic on Lagos-Ibadan expressway today will be mad. If you’re going to Ibadan today, you should think twice,” he wrote.

Another user, @Scar_official added: “When would this incessant accident on Otedola Bridge end? Is it till it kills more people? Why would someone say the bridge is cursed when no root cause analysis has been done by safety professionals & engineers?”

WuzupNigeria confirms that the fire has been contained by the men of the Lagos State Fire Service but Ogun State bound motorists are advised to use alternative routes to their destinations.