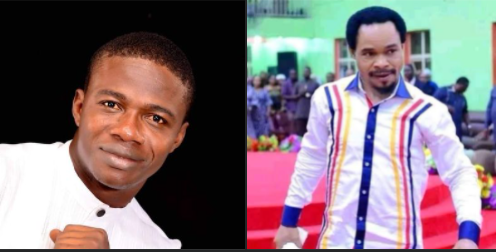 A popular cleric on Facebook known as Goodheart Val Aloysius has challenged controversial preacher, Prophet Chukwuemeka Odumeje to a test of faith.

According to the social media cleric, Odumeje is not fit to be called a prophet and has no spiritual powers from anywhere.

He also said the self-acclaimed ‘Lion’ is nothing more than an entertainer and singer.
Speaking on the late Ada Jesus’ issue, Aloysius claimed on Sunday that when she was brought to Odumeje, he couldn’t heal her as his faith had left him.

He further disclosed that all Odumeje could do was ‘rant stupidity’.

He wrote ;
“With Ada Jesus and Odumeji saga you should now know that odumeji is not a prophet and has no spiritual powers from anywhere.

“All those things he calls miracles in his church are all staged and arranged to make him appear powerful. Odumeji is not a prophet but a mare entertainer and singer.

“Ada Jesus was brought to him for prayers and when he saw the critical nature of the girls case faith left him and he started ranting stupidity. Come to think of it what did Ada Jesus really say about you that is an offence? Just because she observed that your miracles are staged and you picked offence?..

“Young man change your ways before it will be too late.

“Let me and him meet at the national stadium in Abuja on May 31st 2021 by 12noon to call down rain and let Nigerians see a real prophet and a fake prophet.

“All the media houses in Nigeria will be present at the event if any of us fail to call down rain our churches should be closed down. I want every well-meaning Nigerian to support this proof of power,” he said.