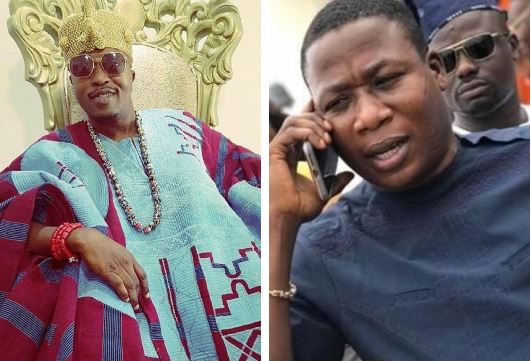 The Oluwo of Iwo, Oba Abdulrosheed Akanbi, has appealed to the President, Major General Muhammadu Buhari (retd.) to call off the manhunt for Yoruba Nation agitator, Chief Sunday Adeyemo popularly known as Sunday Igboho by the Department of State Services.

The royal father made the appeal in a letter addressed to Buhari on Friday.

Akanbi, who pledged to produce Igboho for a peace talk, reassured the president that the self-styled activist would henceforth slow down his agitation for an independent Yoruba nation.

While describing Igboho as an activist, who cannot overlook people being cheated, the Oluwo of Iwo noted that he often calls him to order whenever he attempts to take action that could provoke national outrage.

The letter read in parts, “however, Sunday Adeyemo popularly known as Sunday Igboho earned his popularity as an activist whose joy is to liberate the cheated. He started as such and grew with it. His strategy is not known to me because I’m not in his camp. Whenever I’ve information about his move, I do call him to order.

“He visited my palace sometime in 2018. I give pieces of advice when sought. Instead of Igboho to distinctively differentiate between agitation towards government and inter groups activism, he failed. At a point, he abused stakeholders with spurious allegations.

“I was the first in the list for drumming support for one Nigeria. As a father, I’ve personally forgiven him. And I’m personally beseeching your Excellency as the number one citizen of the Federal Republic of Nigeria to demonstrate your magnanimity by forgiven our promising son, Chief Adeyemo Sunday Igboho. He is a novice in handling issues against the government. He is a gift to us in Yoruba. He has pledged his readiness to listen to us. I appeal to your Excellency to slow down the security trail on Sunday Igboho.

“I have the assurance adhering to this piece will go a long way in strengthening the unity of Nigeria. I promise your Excellency that Igboho will mind his steps henceforth. He has suffered a lot. He would step down agitations. I will bring him for peace talk at the appropriate time.”

According to the royal father, liberal struggles are won on intelligentsia merit, posting that arsenals without strategy will lead to defeat in battle, saying Igboho must have learnt his lessons and would be ready to mend his way.

Related Topics:BuhariigbohoOluwopeace talk
Up Next