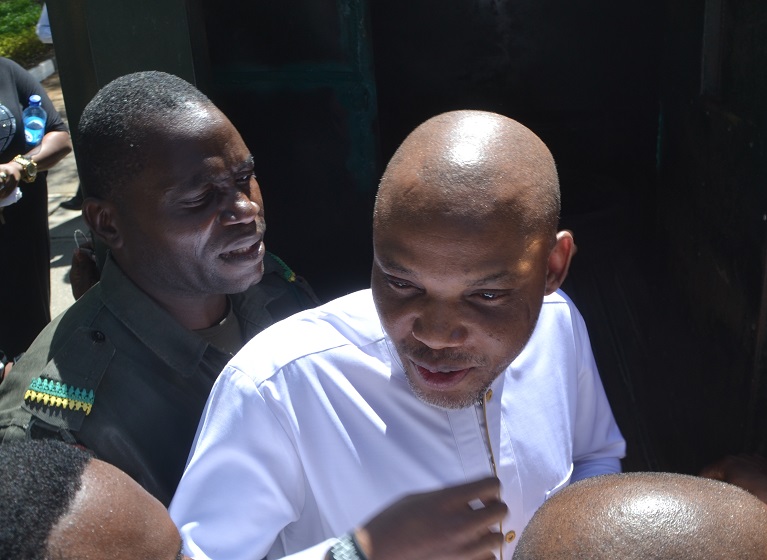 Leader of the Indigenous People of Biafra, Nnamdi Kanu, who has been detained by the Department of State Services, Abuja, has met with his counsels.

According to his lawyers, it was confirmed that Nnamdi Kanu was indeed arrested and detained by the Kenya government for a week, before being handed over to Nigerian authorities.

The lawyers, led by Barrister Ifeanyi Ejiofor, who met Kanu on Friday, noted that his heart had enlarged by 13 per cent due to the dehumanising treatment and torture in Kenya and he now needs “immediate proper medical examination and attention.”

Ejiofor in an update added that Kanu had been arrested since June 18 in Kenya.

Ejiofor said, “My Client – Mazi Nnamdi Kanu, was actually abducted by accursed Kenya’s Special Police Force on the 18th of June 2021 at their International Airport, and consequently taken to an undisclosed residence under dehumanising conditions.

“He was tortured and subjected to all forms of inhuman treatment which worsened his health condition. He was illegally detained for eight good days in Kenya before being transferred to their Nigerian counterpart.

“He was purportedly investigated on a bogus charge while in their custody, ostensibly, awaiting to be handed over after their findings proved him innocent of all the spurious allegations. They later beckoned on their Nigerian Counterpart to take over.

“The Kenya government was deeply involved in the abduction, detention, and ill-treatment of my Client before the illegal handover to their Nigerian counterpart.

“A scan of his heart showed that the heart has enlarged by 13% due to the dehumanizing treatment meted to him. There will be need for immediate proper medical examination and attention for him.

“Mazi Nnamdi Kanu conveyed his goodwill message to all IPOB family members worldwide, and craved for your unrelentless prayers. We are going back to the Court for the needful. Other details cannot be entertained here. His fortified legal team will address these infractions at the proper forum as we progress. Other details on our legal strategy, may not be made public.

“With Chukwuokike Abiama on our side, Victory is assured. For if God Almighty be for us, who can be against us? ”

WuzupNigeria had reported that the Kenya Government strongly denied that it or its security officials were involved in the arrest and extradition of Kanu.

The Kenyan High Commissioner to Nigeria, Wilfred Machage, who addressed a press briefing in Abuja, stated that anyone or group with proofs that Kenyan security officials, agencies or the government arrested Kanu should be free to share them.

Machage added that Kenya, like several other countries, have been named in recent days as where Kanu was arrested, saying Nigerians should demand the true answers from their government, who made the arrest and not from Kenya.

Related Topics:dssFeaturedIPOBKenyaNigeriaNnamdi Kanu
Up Next