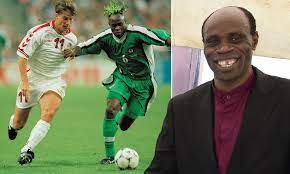 Former Super Eagles and AC Milan defender, Taribo West, has revealed the challenge of growing up in a dysfunctional family and why he fled from Port Harcourt in search of comfort.

West told his story at an occasion organized by a Lagos-based media company, Our Moment Newspaper, where the ex footballer was honoured him with a Lifetime Achievement award.

Narrating his grass-to-grace story, the footballer-turned-pastor, told the bewildered audience that his mum was furious the first time she heard my father voiced his wish to see him become a mechanic.

According to Vanguard, the tension between the couple was palpable and it continued for a while.

“My journey to becoming a world-famous soccer player wasn’t easy. The war started right from my father’s house in far-away Port Harcourt, some decades ago. My father actually wanted me to be a roadside mechanic.

“My mother resisted strongly. She begged and begged him to allow me have, at least, a secondary school education, but he refused. The struggle led me to running away from my father’s house in Port Harcourt, many years ago, at a very tender age, to Lagos, and there stated my struggles”.

Although West was scared like every other adventurous person coming into a new environment, he claimed that he was determined to either swim or sink.

“But, I thank God that all that is history now. I am the rejected stone that later became the corner stone of the house. After quitting football, I ventured into football academy, philanthropy and missionary work. “I run a football academy in Lagos where we discover and train young talents for European clubs.

“I am involved in philanthropic works where we assist so many indigent students and business men and women. Then, I am the General Overseer of Shelter in the Storm Ministry, an end-time deliverance church in Lagos,” he said.

The Nigerian football icon further expressed appreciation to the organisers for picking him ahead of his other impressive professional colleagues for the award.

West indeed had an illustrious career playing for the Super Eagles between 1994 and 2006.

He also plied his trade for big European clubs such as Auxerre, Inter Milan, AC Milan and Derby County where he won laurels.