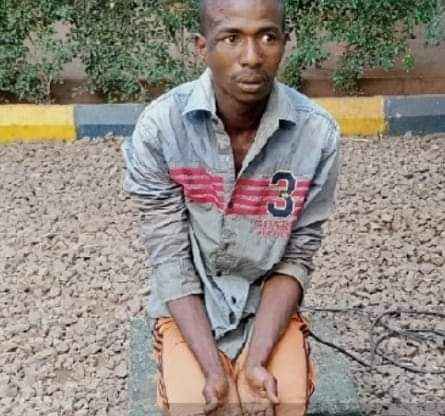 A 20-year-old Fulani herdsman, who allegedly raped a 54-year-old woman to death at Ugwulangwu in Ohaozara Local Government Area of Ebonyi State, has confessed to the crime.

Laulo Isa, Nasarawa State indigene was paraded by the police on Tuesday.

Speaking to newsmen, Isa said he only had one round of sex with his victim, one Mary Okereke, before she collapsed and died.

He claimed that he was under the influence of alcohol when he committed the act, adding that he had no plan to rape the woman but when she insulted him after rejecting his sexual advances he got angry and committed the act.

“I’m Laulo Isa. I’m from Nasarawa State. I came to work here in Ebonyi,” he said. “I was seriously drunk and saw a woman in the night walking along the road. I approached her for sex and she started abusing me.

“We started abusing ourselves and I immediately pounced on her and she started struggling with me to free herself. I was seriously drunk at that time.

”As I was on her, a man who was passing flashed his torchlight on me and I ran away.

The state Commissioner of Police, Awotunde Awosola, told reporters that the suspect will be prosecuted for the crime.

“On December 28, 2019, at about 8 pm, one Laulo Isa, a Fulani herdsman aged 20 years, accosted and waylaid one 54-year-old Mary Okereke on Ufuezeraku Ugwulangwu road in Ohaozara Local Government Area,” the police boss stated.

Nigerian cultists in Turkey allegedly clash over a girl (Video)