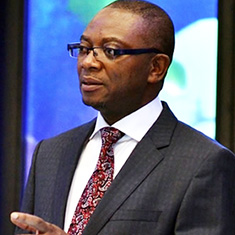 Former director-general of the Bureau of Public Service Reforms, Dr. Joe  Abah, has revealed that he lived with his wife for a year before the got married.

He made the disclosure to his 546.5K followers on Sunday after engaging his followers on a discussion about marriage.

In a previous tweet, Abah had asked his followers: “I wonder what a young couple must do these days to stay happily married for like the next 30 years. What do you think? Ideas, please.”

His question, however, came after attending “the wedding of a young couple yesterday. They can’t be 30 years old yet. Beautiful event. Brought a tear to my eyes.”

While his followers were giving numerous responses and opinion about what can make a marriage last longer,  Abah who has become a social commentator, dropped the shocker.

My Pastor friends will probably “excommunicate” me for this but I will still say it: I will not marry anyone I haven’t lived with for at least a year. I lived with my wife before we married o. It is more difficult for people to pretend for a whole year when they live together.🙈 https://t.co/C57QVSoNLA

According to him, himself and his now-married wife were live-in lovers when they were living abroad, adding that he can’t marry anyone he has not spent that amount of time studying up close.

“My Pastor friends will probably “excommunicate” me for this but I will still say it: I will not marry anyone I haven’t lived with for at least a year. I lived with my wife before we married o. It is more difficult for people to pretend for a whole year when they live together,” he tweeted.

In a subsequent tweet, Abah, however, admitted that although he did it, he can not allow his daughter to do such with her fiance before marriage.

“Having said that though, we were abroad at the time. I don’t think I would have allowed my daughter live with her fiancé for a year before they got married while we are all in Abuja. Mba nu,” the tweet read.

His revelation has lead to numerous remarks from his followers about the stand of Christianity, fornication, and so on.

One user questioned, “And say you are a Christian? Bible disapproves that period.Are we wiser than God who set those principles? If we follow bible’s advice we will definitely succeed for sure. People fail because they did not follow those counsels.”

Another follower added, “How about FORNICATION? How do you propose we handle/address it? The temptation would be excruciating, kinda difficult to live in the same house, with someone you’re emotionally attached, for 360 days without TESTING / LUBRICATING the ENGINE!”

“but he only said they were living together, didn’t say he was sinning. You inferred that he did. And presumption is a sin against hope. Say three Hail Marys,” another follower said in defence of Abah.

Meanwhile, another user, speaking for the millennials, said “Not this generation of over Sabi “woke” ndi mmadu! They can live with someone for five years, endure smoking, heavy drinking, battering etc, then marry the person BELIEVING change will come, after two months of wedding, divorce will be the next headline…”