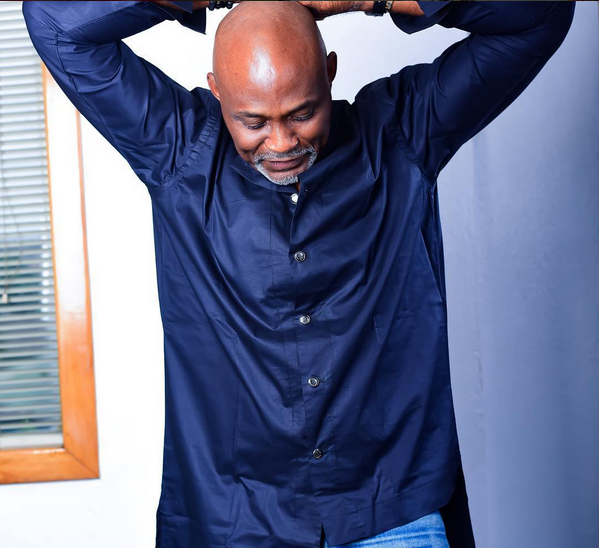 Veteran Nigerian actor Richard Mofe Damijo began his acting career in the ’80s with the movie, Ripples. However, Out of Bounds was the first film for which he received a writer/producer credit.

Ever since then, the thespian fondly referred to simply as RMD has become a household name in Nigeria and the world due to his acting prowess.

In 2005 at the maiden edition of the African Movie Academy Awards Mofe-Damijo won the award for Best Actor in a Leading Role; which is one among many other numerous awards he has received home and abroad.

The 60-year-old actor who has a career that spans over three decades is now getting bald and spots greybeards. Quite active on the social media platform, Instagram, the actor often takes pictures looking dapper in his clothes as he rocks his grey beards and baldness with pride.

During the screening of the movie, Fine Wine, the actor stated that he has been blessed with his career as he has also always been a hard-working person.

Known to have a full rich black hair during his youthful days, the actor spoke about getting old. While talking about old age and the changes that come with the transition, the 60-year-old noted that he embraces it gracefully as ‘everyone gets old.’

The thespian said, “I embrace the fact that I am getting bald and old gracefully. I embrace the transition. It is not difficult for me to embrace getting old, everybody gets old. Why will I be afraid to be old?”

He further spoke about his role in the Neville Sajere movie, Fine Wine a romantic movie directed by Seyi Babatope, and written by Temitope Akinbode, and Diche Enunwa.

The movie details the life of a lonely but rich older man who genuinely falls in love with a younger woman and finds himself in the crossfire of society and in competition with a younger man for her heart.

RMD who played the lead role as the lonely rich man simply said, “I decided to become a part of this project because it was something different and fresh. I keep in shape by trying to keep a healthy routine. I eat healthily and that is all. I guess I am just blessed and I try to work hard. So when good work meets grace, there is no end to how far one can go. In my career, I have faced a lot of challenges but none of them stands out; every movie has its own.”

Chico Ejirio: RMD, Desmond Elliot, others turn up for tribute