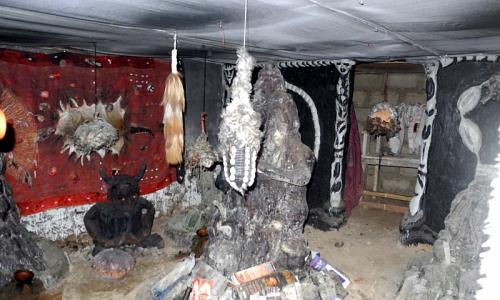 A Twitter user, simply identified as @Oluwafemieden, has left a shocking tale online by narrating his near-death experience at the hands of ritualistic and kidnappers in Ibadan, the Oyo State capital.

Writing in response to a Twitter post by popular video director, Kemi Adetiba, requesting Nigerians to share their near-death experiences on Monday, April 5, 2021, the Event Planner and Manager said that he was kidnapped by ritualists in the ancient city on December 8, 2020.

The responses to her post, including the one you’re about to read, has left Adetiba shocked and speechless, prompting her to say “some of these stories are WILD. Absolutely incredible.”

Although not many live to tell the tale after encounters with ritualist, and some that did probably have a memory of their experience, this lucky Nigerian defied the odds.

Sharing his experience @Oluwafemieden wrote: “I entered a cab going to Bodija from Akobo and the next time I opened my eyes, I was at a ritualist den.”

Having lost consciousness in the public transport he boarded alongside three others, @Oluwafemieden said he woke up to a discussion about killing him.

Read his story below:

“December 8, 2020 I was kidnapped by ritualist in Ibadan. I entered a cab going to Bodija from Akobo and the next time I opened my eyes, I was at a ritualist den. We were three at the back seat. The other two has been killed ‘cos’ I could see their dead on the floor.

” I woke up, trying to make sense of what is happening. Like I am meant to be in Bodija, what in God’s goodness is his place. Then I overheard discussing just outside the hut.

“A le lo” we cannot use him. How he was able to sleep for you to bring him I don’t even understand.

“I was really in shock. I mean they already removed my cloths, prepared for rituals. I stood up, took my shoes and shirt I was ready to run away ‘cos’ I saw a little opening to Japa when I heard. Lets just waste him danudanu or make him forget what happened here.

“The Old man said, I can’t do anything on him. That if that was possible, he would have done it before even informing them. I ran gently into the bus without being noticed. I saw the driver and the other guy that in front of the micra can I took. And a host of luxurious cars.

“I stared running before they will discover I had escaped. I ran for almost 30min before seeing an untarred road. Then I had to run for another 20mins before seeing a good road. I waited until, an old jalopy bike with an old man came around. I narrated my ordeal

“He told me to thank my stars that I was able to escape the even forest and that was when I knew I was no longer in Ibadan but Ogun State. He took me to an old park, bought water for me, paid my tfare cos I can’t find my wallet again.

“That’s how I escaped.

“The story is longer than this but the summary was and is. It was a near death experience. I was in shock for few weeks. I still get to imagine it once in a while”

The logic of Tinubunomics BY Ademola Adebisi