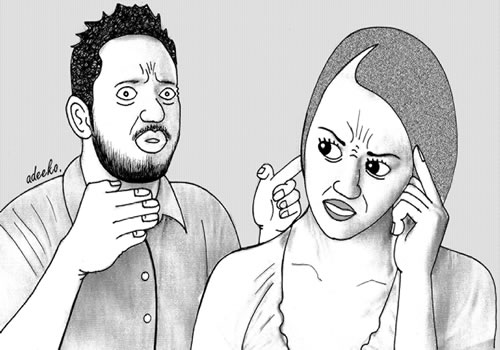 A cleric, Abdulrasheed Olalere narrated how he caught his wife, Mariam in bed with another man when she was just four months pregnant.

Olalere, who filed a divorce suit against Mariam, accused her of infidelity and attempts to elope with her lover.

He said they settled and he accepted his wife back after he caught her cheating on him with another man.

”I caught Mariam in bed sleeping with another man when she was just four months pregnant. I was angry with her but we settled the matter,” he said. ” The man also laid claims to the baby. But after medical reports, revealed that the date given by the man proved him wrong about the date of the pregnancy, I accepted her back.”

The cleric added that after interventions from different people, things started going on smoothly between them until his wife went back to her lover.

He said “My lord, I caught her trying to elope with that same man. Mariam is wayward.”

Reacting to all the allegation, Mariam insisted that her husband was irresponsible and uncaring.

She didn’t deny that she attempted to elope with her ex-boyfriend.

The Mapo Customary Court sitting in Ibadan on Friday dissolved the six-year-old marriage in the interest of peace.

The President of the court, Chief Ademola Odunade held that the marriage was initially not built on a solid foundation of love and trust.

Odunade awarded custody of the child to Mariam and directed Olalere to pay N5,000 for the child’s monthly upkeep.