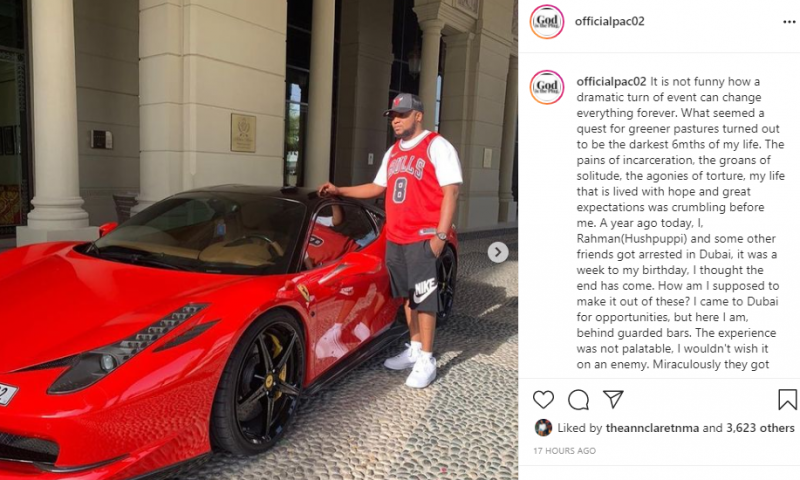 An acquaintance of suspected Nigerian fraudster Ray Hushpuppi, identified only as Pac, who was nabbed along with him in 2020 has regained his freedom.

Hushpuppi was already popular on Instagram for his luxurious lifestyle which was documented exhaustively on his page.

Hushpuppi and his accomplice were accused of leading a transnational network of cybercriminals whose targets included a US law firm, a foreign bank and an English Premier League football club.

Narrating his experience on his instagram account, Pac disclosed that the arrest came a week to his birthday and he thought the end had come.

Pac stated that his quest for greener pastures has turned out to be the darkest six months of his life.

He revealed that he was released because security operatives had nothing on him.

The Instagram user also said that he hopes Hushpuppi gets lucky too.

“It is not funny how a dramatic turn of event can change everything forever. What seemed a quest for greener pastures turned out to be the darkest 6mths of my life. The pains of incarceration, the groans of solitude, the agonies of torture, my life that is lived with hope and great expectations was crumbling before me.

“A year ago today, I, Rahman (Hushpuppi) and some other friends got arrested in Dubai, it was a week to my birthday, I thought the end has come. How am I supposed to make it out of these? I came to Dubai for opportunities, but here I am, behind guarded bars. The experience was not palatable, I wouldn’t wish it on an enemy. Miraculously they got nothing on me. Freedom is good, but the experience remains indelible as I can’t free my thoughts and minds from the grips of confinements. I still have nightmares.

“For all it is worth, I am happy to walk the street and take-in the air as a free man. I am thankful for life and for the grace to look forward to my next birthday as a celebration of life and not behind bars counting down days with possibilities of worst outcomes. Life has not been the same since, more so, with my best friend and benefactor (Hushpuppi) still in detention.

“I hope he gets lucky too. I hope he returns back to his friends and families in one healthy piece.

“I want to thank everyone that stood by me during these trying times. I want to say thank you to obakaakaki for the ceaseless love and affection.”