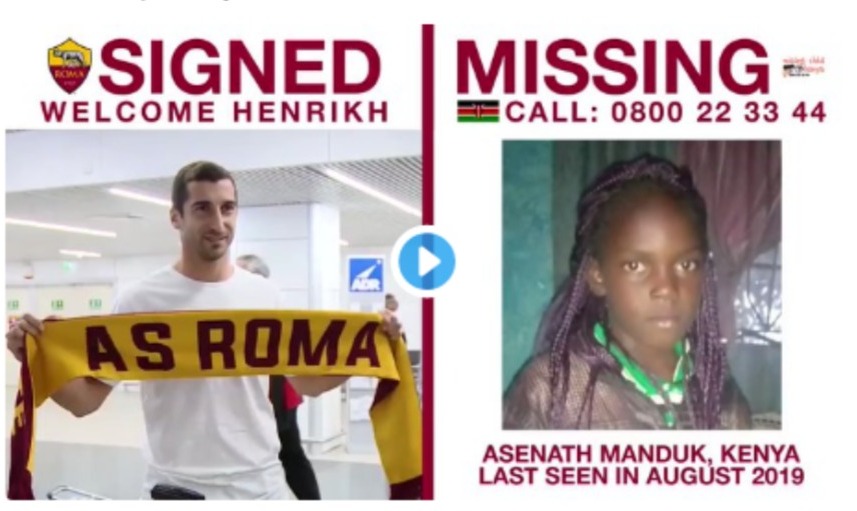 Henrikh Mkhitaryan’s close-season transfer to AS Roma has made a lasting impact off the pitch, helping a missing Kenyan boy reunite with his family thanks to the Italian club’s social media campaign.

An image of the child, 13, was featured on Twitter alongside one of Armenian midfielder Mkhitaryan when he completed his loan move from Arsenal earlier this month.

Roma, who have over five million followers across social media platforms, confirmed here on Twitter on Monday that the boy last seen in August had been found and returned to his family.

A 13-year-old Kenyan boy featured in the #ASRoma announcement video for @HenrikhMkh has been found safe & reunited with his family.

The club partnered with the amazing @missingchild_ke in July to raise awareness about cases of children missing in Kenya🛑 pic.twitter.com/MMQExRGj5a

“Through @missingchild_ke partnership with @ASRomaEN we lit a big candle of hope to guide these children back home to their families,” Maryana Munyendo, executive director of Missing Child Kenya, a charity that has teamed up AS Roma, wrote on Twitter.

Last month, a 15-year-old girl from London was found safe and well six days after featuring in a Roma video to announce the arrival of new signing Mert Cetin.

In June, Roma partnered with two charities – the US-based National Center for Missing and Exploited Children and Telefono Azzurro – to launch a social media campaign in a bid to raise awareness about missing children.

“We have a massive social media following and our announcements generate incredible reach and awareness, all over the world,” Paul Rogers, head of strategy at AS Roma, said at the time of the launch.

“We thought that at the exact moment when the world’s attention is on the club’s announcement, we could use our social media channels not for self-promotion but rather to help both the National Center for Missing and Exploited Children and Telefono Azzurro find missing children.”