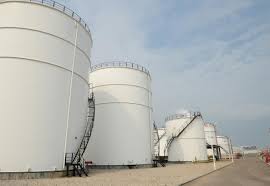 The House of Representatives Ad-hoc Committee on Relocation of Tank Farms in Residential Areas across the country has raised alarm over the poor state of the facilities.

The committee’s Chairman, Mr. Sergius Ogun, described the facilities as time bombs on Thursday in Benin, during stakeholders meeting with tank farm operators and some relevant government agencies.

Some of the agencies at the meeting were: the Department of Petroleum Resources, Nigerian Port Authority, Nigerian Maritime Administration and Safety Agency, Ministry of Environment and Federal Fire.

Ogun said that most of the petroleum products depots inspected by the committee between Tuesday and Wednesday in Delta did not meet the required standards.

The House of Representatives had on March 19 constituted the ad hoc committee, following a motion by a member on the need to relocate tank farms in the residential areas of Ijegun, Kirikiri, and other areas in Lagos.

The committee was saddled with the responsibility to investigate the activities of the tank farms in the country to ensure the safety of lives and property in the areas.

According to the chairman, the companies had issues with compliance to the rules of the business.

“All the tank farms are tinkling time bomb; the fire hydrants for some of them are not working and there are many other defaults. They must attend to those things.

“One accident can knock out a whole community. We are not talking about the company, staff, and the billions the owners claimed they have invested.

“We are giving them time to correct those errors.

Some members of the committee will be coming back in the next two weeks to inspect those facilities and if they still do not comply, we will issue a statement.”

“If the agencies work together, they will be able to check the excesses of the tank farm operators,” he said.

Also speaking, the Vice-Chairmen of the Ad hoc committee, Mrs. Miriam Onuoha, urged the Delta Government to partner with the depot operators in the state in providing a good road network and other basic infrastructure.

“There are a lot of infrastructural decays in the areas the tank farms operates.

“So, there is need for the Delta government to synergize with the tank farms in the provision of basic infrastructure,” she said.