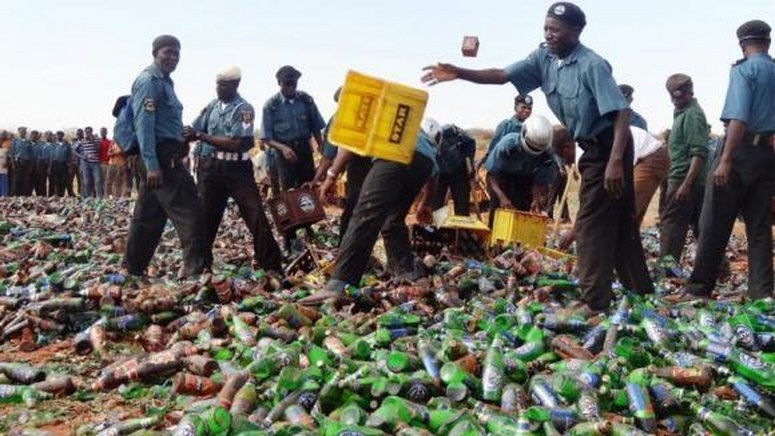 The Bauchi State Hisbah Board has confiscated 260 crates of alcoholic drinks from hotels and night clubs as part of its effort to enforce Sharia Islamic code.

Malam Aminu Balarabe the permanent commissioner in charge of Hisbah and Sharia implementation made this known while displaying the the commodity in Bauchi on Tuesday.

He said 216 crates were confiscated in Misau local government area and 44 in Bauchi club and some beer parlours located in Dass park in Bauchi metropolis.

” We will continue to beam our searchlight to unravel perpetrators of such misdemeanors” he said.

He said the department would soon seek for a court order to destroy the items as the subsisting Sharia law which was implemented in 2003 has unequivocally prohibits sales and consumption of alcoholic drinks.

Balarabe who displayed the confiscated drinks at the premises of the state Sharia commission explained that no fewer than six operators of beer parlours were arrested during the patrol and they would soon be prosecuted to serve as a deterrent to others.

”The only places where sales and consumption of alcoholic drinks are allowed are Military and Police barracks,National parks. We are fully committed to implementing our mandate,” he said.

It was reported that the Hisbah department in Bauchi, recently arrested some young men in Tafawa Balewa LGA who specialise in organising sex parties and committing other criminal tendencies.

Malam Aminu Idris, the permanent commissioner in-charge of Hisbah and Sharia implementation,told reporters that the suspects were in the habit of organising disco parties, locally called Gwaidu, during which they lured young girls into illicit sexual relationships, while at times they used force to intimidate innocent people.

NAN reports that after discreet investigations, the commissioner said, the state Hisbah office summoned the parents of the culprits, counselled them and made them to sign an undertaking against repeating the offence.

Idris said the Hisbah department would, hence forth, not hesitate to prosecute such culprits in a competent court of law, stressing, “As a Lawyer I will do everything possible to ensure that our existing laws were not flagrantly violated.”

He appealed to the state government to hasten the appointment of the state Hisbah Board, as well as provide additional financial and logistics support to the department to enable it perform optimally.

My boyfriend of two years has never said he loves me, should I be worried? lady asks