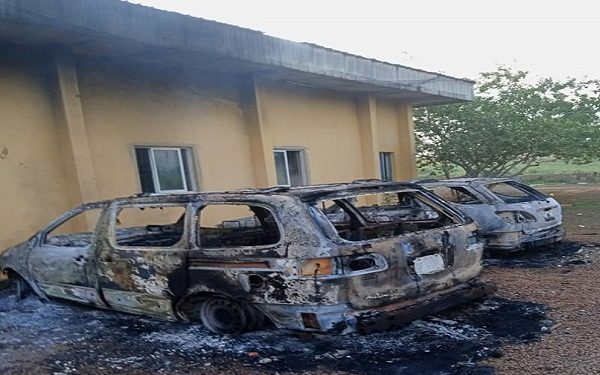 Gunmen, on Saturday, attacked and killed six persons – five policemen and a cop’s wife- during an attack on the Odoro Ikpe Divisional police headquarters in the Ini local government area of Akwa Ibom State.

The attackers, suspected to be members of the Indigenous People of Biafra (IPOB), allegedly raided the police station around 2:45 a.m in two buses and a Sienna car and set ablaze patrol vehicles.

A statement posted online reportedly issued by the office of the LGA Chairman, Isreal Idaisin, said that some other police officers also sustained severe injuries during the attack.

“The gunmen who came in two buses and a Sienna car filled with armed men numbering more than 40, arrived Ini Local Government Area with sophisticated weapons, broke into the police facility at precisely 2:45 am, killed five policemen on duty, burnt vehicles and inflicted injuries on others. Also read: Taking the bull by the horn: IGP Alkali vows to improve public safety “Some police officers who attempted to repel the gunmen were overrun,” the statement read.

“I urge the good people of Ini LGA to stay calm as we are working with relevant security agencies and the Government of Akwa Ibom State to ensure that the situation is contained.

“Necessary modalities are being put in place to forestall a reoccurrence.

“There is no cause for fear as the culprits will be brought to book in no distant time.”

The Police Public Relations Officer, Mr Odiko MacDon confirmed the attack said he was already at the scene for an on-the-spot assessment.

He said, “Yes, there was an attack at the Divisional Police headquarters, Odoro Ikpe in Ini Local government area. Six persons including five officers and a wife of an officer were killed. I am at the station as we speak.”

The latest attack brings the total number of police officers killed within the month of May alone in the state to seven and nine (9) from April 27, 2021, when the hoodlums resumed attacks on Police facilities and killing of the officers after the Joint Military Operations.

It could be recalled that the gunmen had on May 1, 2021, about 3 a.m attacked Ibiaku Ntok Okpo Police station in Ikono local government area and killed two police officers and burnt five vehicles.

Subsequently, on Sunday, May 2, they invaded and set ablaze the Area office of the Independent National Electoral Commission (INEC) in Essien Udim Local government area, which led to excessive destruction of electoral materials and facilities.