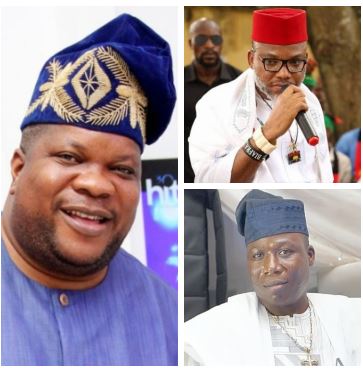 A first-class traditional ruler in Yewa Division of Ogun State, the Eselu of Iseluland, Oba Akintunde Akinyemi has called on the President, Major General Muhammadu Buhari (retd) to reduce the tension in the country by having a dialogue with secession agitators, including the embattled leader of the Indigenous People of Biafra, Nnamdi Kanu.

Akinyemi posited that the emergence of an Igbo president in 2023 would calm the insecurity and unrest in the South East.

The monarch also called on the Federal Government to consider granting amnesty to the Yoruba nation agitator, Sunday Adeyemo, popularly called Sunday Igboho who has been declared wanted by the Department of State Services.

Oba Akinyemi stated this in a three-page letter titled “Open letter to President Muhammadu Buhari: The need for the emergence of a Nigerian president of South Eastern extraction comes 2023″.

While reading out the letter to newsmen in Abeokuta on Sunday, he urged Buhari to adopt dialogue rather than clamp down on secession agitators in the country.

According to him the tension in Nigeria can be traced to alleged injustice and inequality from the South East.

He reiterated that the tension will disappear if other regions in the country could rally round the South East to produce the next president.

” I want to state without equivocation that the entire security challenges bedevilling this country from the South East will disappear within a twinkle of an eye, if and only if, all sections of this great country can come together to pave the way for the emergence of a Nigerian President of Igbo extraction in the year 2023.

” In the light of this, I want to appeal that your excellency should use dialogue rather than clamping down on the secessionist agitators in the country, especially in the South East which now looks like a war zone.

“It is a fact that the Leader of the Indigenous People of Biafra (IPOB), Nnamdi Kanu has been rearrested to face the charges against him, but dialogue with all sections of the country will help to nip in the bud, the various security challenges which have sprung up in the South East and other sections of the country.

“If dialogue is adopted, it will definitely prevent more of Nnamdi Kanus from springing up in the South East and the country in general. I am also pleased to remind you sir that the peace we enjoy today in the Niger Delta region is due to dialogue, not war sir .”

“If your Excellency can be magnanimous to support and enthrone a Nigerian president of Igbo extraction in the year 2023. It will not.”

On Sunday Igboho, Oba Akinyemi while fielding questions from newsmen, appealed to Buhari to consider granting amnesty to Sunday Igboho.

The monarch appealed to Buhari to temper justice with mercy and grant Igboho amnesty to allow other agitators to surrender their arms.

The Monarch said if the president could give amnesty to repentant boko haram members, who he said are deadlier than Igboho, he should also consider Igboho for amnesty.

His words “Amnesty happened in the South-South and in the north, even Boko Haram members got amnesty and I don’t think Sunday is as deadly as Boko Haram, we can let him face the tune.

We need to come together and rise up to our expectations as Yoruba people.

“Sunday Igboho came to my palace, I know his motives and I like him, he is coming out from his shell to say enough of these killings in Yoruba land but I don’t support him bringing in arms and I would never do that. On the issue of unlawful possession of firearms, it is against the law, I don’t support that”.

Related Topics:AmnestyBuhariigbohoKanuOgun monarch
Up Next