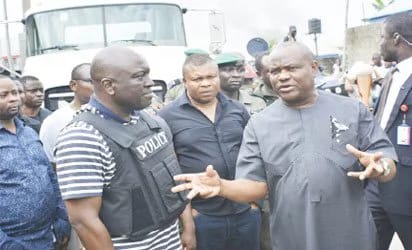 Governor Nyesom Wike of Rivers state has begun an onslaught against kidnappers, cultists and other gangsters in the state with the an ongoing demolition of the hideouts of criminals in Port Harcourt and Obio Akpor local government areas of the state.

According to reports, Wike in the company of the state commissioner of police, Folunso Adebanjo and men from other security agencies supervised the demolition of several properties belonging to the criminals and confiscated their landed property.

Governor Wike and security operatives stepping into one of the dens before the demolition.

The governor vowed to continue the offensive against criminals until the entire state was clean of cells operated by the miscreants.

Wike has urged communities and other stakeholders to volunteer timely information to security operatives to enable them succeed in the task of making the state safe.

He said: “The Rivers State Government has taken over the criminal hideout of these arrested cultists. After the ongoing demolition of their hideouts, we will build a police station and mini barracks in this location. We have also taken over the home of the kingpin that we have also demolished.

“This is to let members of the public know that this administration is serious. We will not allow anyone to cause insecurity in this state. We will chase criminals to their hideout and reduce crime.”

The governor however said his government was ready to grant amnesty to kidnappers that show remorse and quit crime.

CAN speaks fire over murder of Redeemed preacher