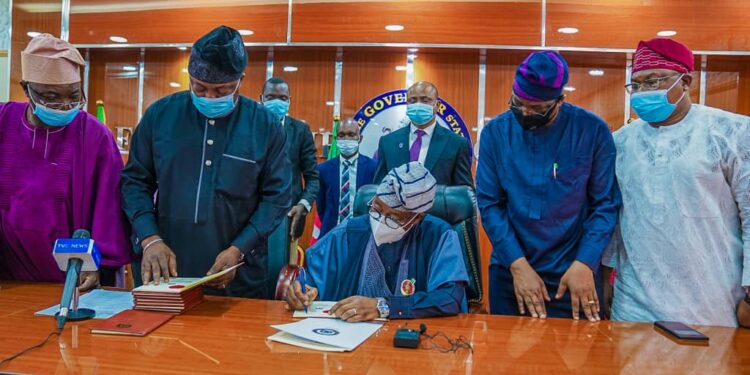 Gov. Gboyega Oyetola, on Thursday forwarded the name of Justice Wasiu Akanbi, to the Osun House of Assembly, for ratification, as the newly appointed President of the Osun State Customary Court of Appeal.

The Speaker of the Assembly, Timothy Owoeye, while reading the letter of appointment received from the governor said , the governor made the appointment based on the recommendation of National Judicial Council.

Owoeye said the governor was sending the name of the appointee to the house for ratification based on section 28 (1) of the Federal Republic of Nigeria 1999 (amended) Constitution .

The speaker, however, called on the appointee to submit 35 copies of his curriculum vitae (CV) to the Assembly between Thursday and Monday and that he should also appear before the House on Tuesday, Feb.2, for screening.

Earlier, the Assembly organised an interdenominational praised and worship prayer session to usher in the 2021 legislative year.

The prayer session which was organised for the assembly staff and lawmakers was presided over by the assembly Speaker, Timothy Owoeye.

Prayers were rendered by Muslim and Christian members of the assembly commission , while the Imam of the Assembly Mosque and the Chaplain of the Assembly Chapel gave scriptural reading and teaching.

Picking from the clerics’ teachings, Owoeye said people should understand that they would reap what they sow, like the topic of the Imam’s teaching, and that people should always seek peace for peaceful coexistence, just like what the Chaplain taught