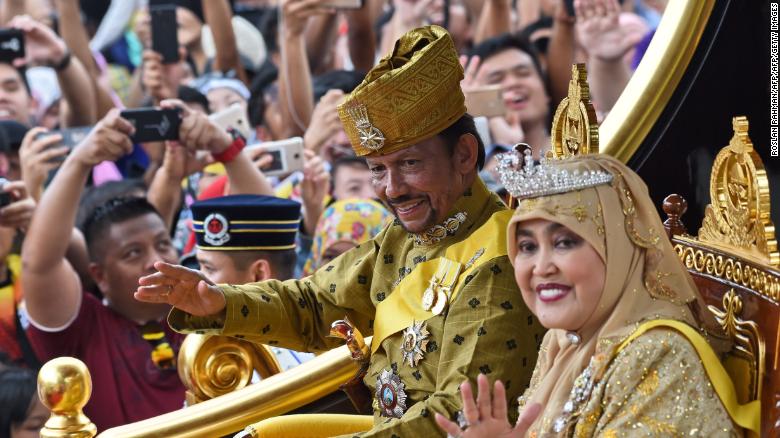 A law seeking to punish adultery and homosexual sex with death by stoning goes into effect on Wednesday in Brunei and it is evoking outrage among world leaders.

Anyone found guilty of the offenses will be stoned to death, according to a new penal code based on Sharia law, an Islamic legal system that outlines strict corporal punishments.

The new law stipulates the death penalty for a number of offenses, including rape, adultery, sodomy, robbery, and insulting or defaming the Prophet Mohammad.

It also introduces public flogging as punishment for abortion as well as amputation for theft and criminalizes exposing Muslim children to the beliefs and practices of any religion besides Islam.

The strict new laws were announced by the Sultan of Brunei, Hassanal Bolkiah, in 2014 and have been rolled out gradually in the small nation on the island of Borneo in Southeast Asia. The latest phase of implementation, including the brutal new provisions, was quietly announced on the Brunei attorney general’s website in December.

“the Sultan does not expect other people to accept and agree with it, but that it would suffice if they just respect the nation in the same way that it also respects them.”

Despite global outrage and condemnation that has followed plans to bring the law into effect, the country has said it has no plan to halt it.

A statement from the office of Brunei’s Prime Minister released over the weeks says;

The United Nations on Monday described the new laws as “cruel and inhuman” .

“I appeal to the government to stop the entry into force of this draconian new penal code, which would mark a serious setback for human rights protections for the people of Brunei if implemented.”

The US Department of State in  a statement said;

“Governments have an obligation to ensure that all people, including LGBTI people, can freely enjoy the universal human rights and fundamental freedoms to which they are entitled,”

“We strongly oppose human rights violations and abuses against LGBTI persons, including violence, the criminalization of LGBTI status or conduct, and serious forms of discrimination.”

“Hard to comprehend what could be driving such a barbaric move which stands in stark opposition to fundamental #humanrights principles.”

“Stoning people to death for homosexuality or adultery is appalling and immoral. Every single person on earth is entitled to be treated with dignity and to live without fear. There is no excuse — not culture, not tradition — for this kind of hate and inhumanity.”

Austrian Chancellor Sebastian Kurz described the law as “cruel and inhumane” and called for its withdrawal.

“Brunei must immediately halt its plans to implement these vicious punishments and revise its Penal Code in compliance with its human rights obligations. The international community must urgently condemn Brunei’s move to put these cruel penalties into practice.”

Is Adams Oshiomhole a secret weapon of the PDP? BY Femi Aribisala