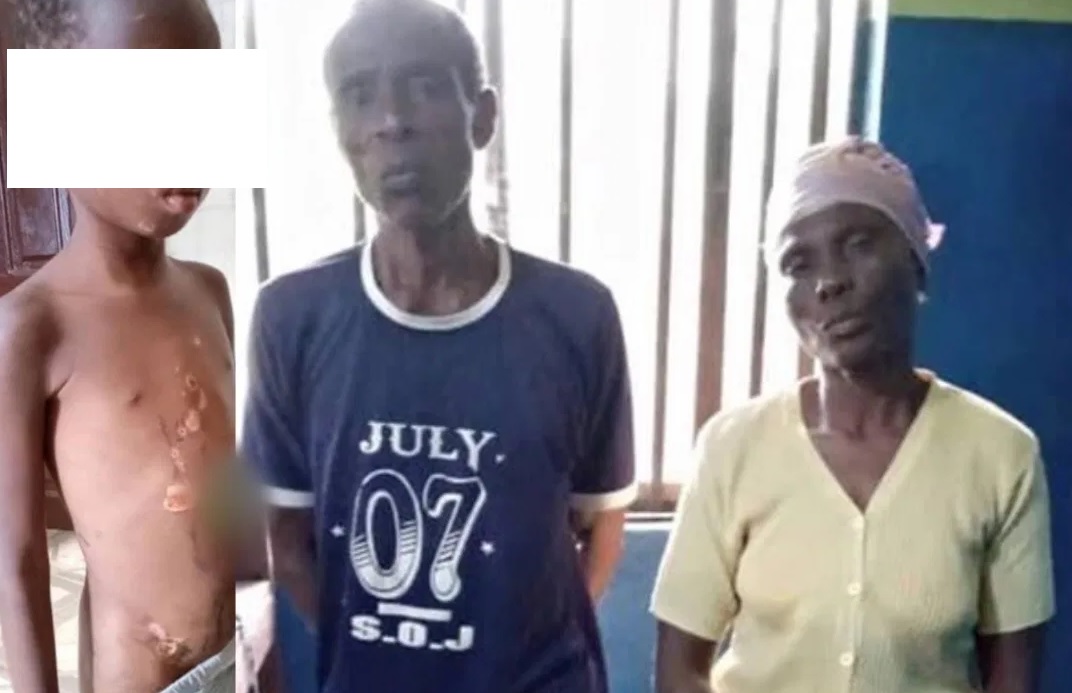 A seven-year-old girl has dragged her grandparents to the police in Ogun State, accusing them of emotional and physical abuse.

The child, who is an orphan, alleged that the grandparents, 57-year-old Joseph Akporugo and his wife, Janet, accused her of killing her father through witchcraft.

She added that as punishment they would light rubber materials and use same to burn different parts of her body.

On Tuesday, she summoned the courage, walked up to a policeman who lives on the same street with her in Awa-Ijebu area of Ogun State, and narrated how she was being maltreated and abused.

The duo were consequently arrested by men of Ogun State Police Command for maltreating the orphan.

Preliminary investigation revealed that the victim is Akporugo’s granddaughter, and her ordeal began when her father died and she was accused of killing him through witchcraft.

The abuse began when she started living with her grandfather and his wife since her biological father’s demise.

Describing the abuse she had been subjected to, the child, who spoke in Yoruba, said:

“They beat me every day, accusing me of being a witch.

“These wounds (pointing to her stomach) were inflicted on me by them. They put a rubber on the fire and placed it on my stomach and other parts of my body.”

“The Constable she reported to took her to Awa-Ijebu Police Station where the case was incidented.

“The DPO, CSP Adewalehinmi, subsequently detailed detectives to the couple’s house and they were promptly arrested.

“On interrogation, the couple were unable to justify their devilish maltreatment of the innocent little girl.

“Meanwhile, the Commissioner of Police, CP Kenneth Ebrimson, has ordered a proper investigation into the case with a view to diligently prosecuting the suspects.”