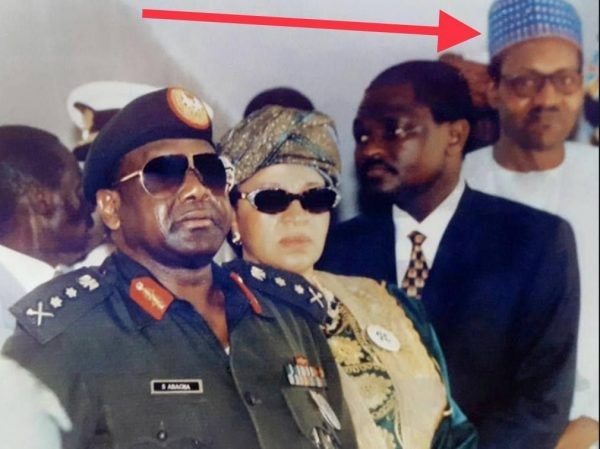 General Buhari was a member of General Sani Abacha’s cabal. He was not just a member, he was a prominent member. He was Abacha’s right-hand man. Abacha is the world’s biggest thief, EVER. It is difficult to believe he pulled off his heist without Buhari’s knowledge.

And when you take into account General Buhari’s insistence that Abacha did not steal, though his thievery is of world record-breaking savagery, you begin to see his incredible assertions in a new light. I am not sure Buhari is protecting Abacha when he says that. Perhaps he is protecting himself.

As the adage goes, show me your friends, and I will tell you who you are. Look at Buhari’s friends. Abacha (the world’s biggest thief). Babachir Lawal (of grasscutter fame). Nasir Danu (caught at Heathrow with a fake passport and huge sums of money). It is easy to see what Buhari is.

Buhari cannot deny that he was a cabalist under Abacha. We have eyewitness testimony from no less a witness as former Governor Donald Duke.

In a June 2018 interview, the former Governor of Cross River State testified of his interaction with Abacha’s cabal at Aso Rock as follows:

“One day, we were summoned to the Villa, and we were told it was over our bitumen report.

From the above, General Buhari cannot deny that he is a companion of thieves and criminals. So, where then is his famed but non-existent integrity? An integrity that could not tell us the identity of the owners of the Ikoyi Apartment billions? An integrity that is trying Atiku Abubakar’s in-law on trumped-up charges of money laundering, while wilfully ignoring the fact that bullion vans were caught by drones going into the house of Bola Tinubu, on the eve of the last Presidential elections, in contravention of the Money Laundering Act, 2011.

These are the realities that Transparency International sees that has made it declare that Nigeria, under General Buhari, is more corrupt than she ever was at any time under former President Jonathan.

The truth is that General Buhari is as corrupt and tribalistic as they come. And you do not need to look too far. Read his comments on fuel subsidy before he became President. He called it a fraud. He said he would get rid of it. He got elected and rather than get rid of it, as he promised, he increased it.
Now, is that honesty? Is that integrity? No. That is Taqiyya-a widely abused principle that allows some persons to lie to those who do not share their faith, to deceive them into letting their guards down.

This is a man whose wife does not even believe in him and has said so privately and publicly!

So, let me make this challenge to all those still in the delusory phase of believing that General Buhari has integrity. If he has integrity, then prove it by answering the following questions:

10 Questions for Those Who Say General Buhari Has Integrity

What happened to Aisha Buhari’s ADC and the billions he allegedly stole?
* Why is Bola Tinubu not being charged despite clear evidence of bullion vans carrying money into his home on Election Day, in contravention of the Money Laundering Act, 2011
* What happened to Nasir Danu, Buhari’s right-hand man, who was arrested at London Heathrow Airport with huge undeclared sums of money and a fake passport?
* Who owns the Ikoyi Apartment billions?
* What has happened to Babachir Lawal’s case?
* Where did Yusuf Buhari get money for his multimillion naira power bike?
* Why was NNPC’s $25 billion never investigated?
* Why was General Buhari daughter made a manager at an NNPC subsidiary?
* How come Nigeria’s foreign debt increased from $7 billion in 2015 to $30 billion today, with little to show for it?
* Why was Buhari seeking a $500 million loan to digitalise NTA, at a time when Nigeria had more pressing needs?
If you can satisfactorily answer these questions, I will believe with you that Buhari has integrity.

The truth is that General Buhari is as corrupt and tribalistic as they come. And you do not need to look too far. Read his comments on fuel subsidy before he became President. He called it a fraud. He said he would get rid of it. He got elected and rather than get rid of it, as he promised, he increased it.

Now, is that honesty? Is that integrity? No. That is Taqiyya-a widely abused principle that allows some persons to lie to those who do not share their faith, to deceive them into letting their guards down.

General Buhari has repeatedly used Taqiyya on Nigeria. What happened to his promise to restructure Nigeria? What happened to the vow to create 3 million jobs per annum (instead he has lost 17 million jobs so far, and he is not done)? Where is the commitment that “I belong to everybody, and I belong to nobody.” (Plagiarised from Charles De Gaulle)?

The man who said he belongs to nobody has surrounded himself with Northern Muslim men.

Under General Buhari, the heads of the Executive, Legislature, Judiciary, Defence Ministry, Army, Police, NSA, DSS, NIA, DMI, DIA, NPS, NCS, NIS, and EFCC are all Northern Muslim men. This lack of balance is against the Federal Character Act of 1996. It is ILLEGAL‬!

But beyond being illegal, General Buhari has turned Nigeria’s Federal Government into a Muslim brotherhood. If you thought that he was joking when he said “the constituents, for example, gave me 97% cannot, in all honesty, be treated on some issues with constituencies that gave me 5%”, his appointments must have left you with no other option than to see that he is a stark, raving, nepotist!

This is a man that will rain down fire and brimstone on IPOB, Niger Delta militants, Shiites and other 5 percenters, but when it comes to herdsmen, the vicious and unforgiving General Buhari turns to a pussy cat and loses all his viciousness.

This is a man who refused to send a plane to repatriate Nigerians stranded in South Africa during the sad xenophobic attacks in that country, or in Wuhan, when COVID19 broke out, but he speedily sent planes to pick up Boko Haram members and their wives and children, from the Niger Republic to Nigeria, where they were sent to a well-appointed rehabilitation centre. This is even as the gallant men and women of our armed forces, who were wounded in service, have not been given such treatment.

If you want to understand General Buhari, then you must go and study the principle of Taqiyya. Otherwise you will just focus on his words and not his actions until you become a victim of Taqiyya yourself.

*This article was first published in Medium of 10 May 2020

Can Tinubu Sleep with His Two Eyes Closed? BY Raheem Akingbolu

Gastroenteritis/food poisoning BY Dr Adeniyi. A