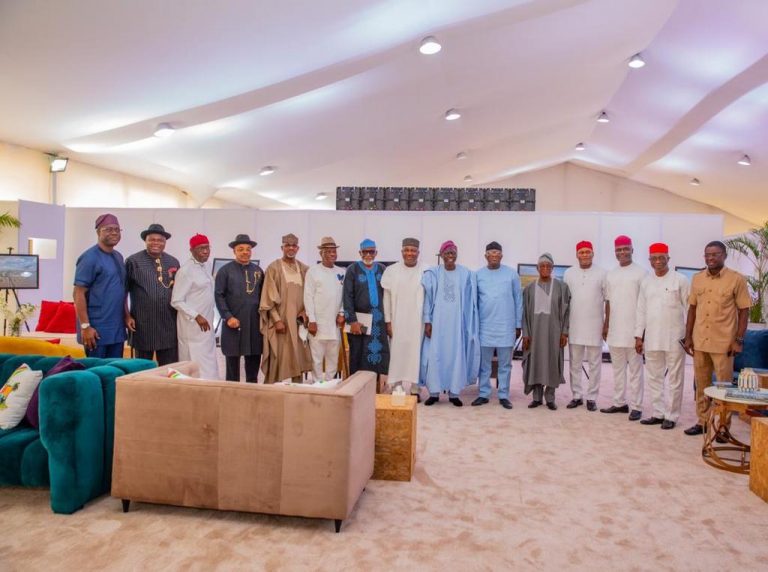 The Southern Governors Forum held a meeting on Monday, 5th July, 2021 to review the situation in the Country and focused on the current security situation, constitutional amendment, Petroleum Industry Bill (PIB).

WuzupNigeria reported that the meeting which included all 17 governors of the Southern region held at the Lagos State Government House located in the Ikeja area of the state.

The meeting comes after the passing of the PIB, Department of State Services’ raid of Yoruba activist, Sunday Igboho’s residence, as well as the killing of a young drink seller, Jumoke Oyeleke, in Lagos via police stray bullet while dispersing Yoruba Nation activists, amongst other issues.

See the full text of the communique signed by Arakunrin Oluwarotimi Odunayo Akeredolu, SAN, Governor, Ondo State and Chairman, Southern Governors’ Forum, after the meeting below:

Rising from the meeting, the Forum agreed on the following:

1. Re-affirmed their commitment to the unity of Nigeria on the pillars of equity, fairness, justice, progress and peaceful co-existence between and amongst its people.

2. The Forum reiterates its commitment to the politics of equity, fairness and unanimously agrees that the presidency of Nigeria be rotated between Southern and Northern Nigeria and resolved that the next president of Nigeria should emerge from the Southern Region.

3. Security
a. The Forum reviewed the security situation in the country and commends security operatives for their relentless efforts in restoring security and safety and commiserates with families and loved ones of those who have fallen in the line of duty;

b. Re-emphasised the need for State Police;

c. Resolved that if for any reason security institutions need to undertake an operation in any State, the Chief Security Officer of the State must be duly informed;

d. the forum frowns at selective criminal administration of Justice and resolved that arrests should be made within the ambit of the Law and fundamental human rights;

e. Set a timeline of Wednesday, 1st September, 2021 for the promulgation of the anti open grazing law in all member States; and

f. Resolved that Funds deducted from the Federation Account for the Nigeria Police Security Trust Fund should be distributed among the States and Federal Government to combat security challenges.

i. The Forum commends the National Assembly for the progress made in the passage of the PIB;

ii. the Forum rejects the proposed 3% and support the 5% share of the oil revenue to the host community as recommended by the House of Representatives;

iii. the forum also rejects the proposed 30% share of profit for the exploration of oil and gas in the basins;

iv. However, the forum rejects the ownership structure of the proposed Nigeria National Petroleum Company Limited (NNPC). The Forum disagrees that the company be vested in the Federal Ministry of Finance but should be held in trust by Nigeria Sovereign Investment Authority (NSIA) since all tiers of Government have stakes in that vehicle.

5. In order to consolidate our democracy and strengthen the Electoral process, the Southern Governors’ Forum reject the removal of the Electronic transmission of the election result from the electoral act; and also rejects the confirmation of exclusive jurisdiction in pre-election matters on the Federal High Court.

6. The Forum unanimously chose Lagos State as its permanent secretariat and appreciated the Governor of Lagos State for the wonderful hosting of this meeting while commending him for his good work in the State.