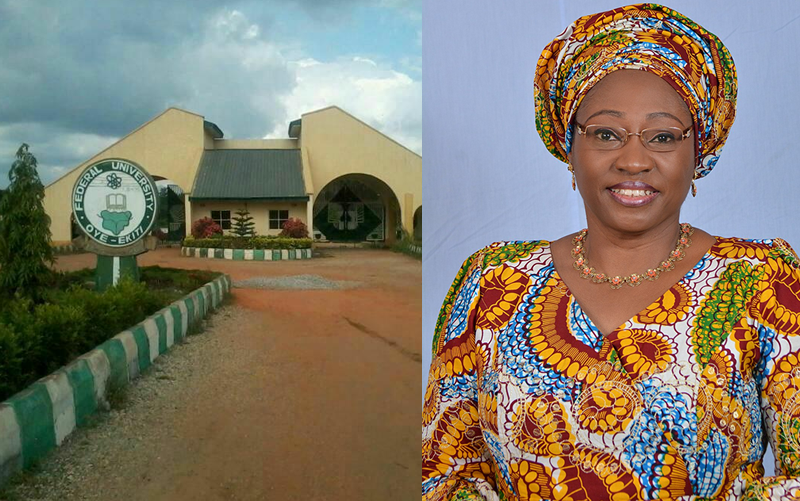 The National Association of Nigerian Students (NANS) has condemned the alleged killing of two students of Federal University, Oye Ekiti, and injuring of others by security details attached to Bisi, the wife of Ekiti State Governor, Kayode Fayemi.

The association further declared Mrs Fayemi a persona non grata in any Nigerian university, warning her “to always keep 50 meters away from all our campuses in the country”.

The security details had allegedly shot dead one Dada Kehinde Abiodun, a 100 level student at the Department of Crop Science and Horticulture, and another during a protest on Tuesday.

MORE READING!  'My husband of 16 years and I never had a problem until he took second wife'

Azeez said that trouble started when the protesting students sighted the wife of the governor and wanted to explain their reason for the protest to her, but one of her security personnel slapped the Students Union President.

Angered by Mrs Fayemi’s act, the student pelted her convoy with sachet waters, prompting the Governor’s wife to order her security aides to be ruthless with the students, NANS alleged.

“A student, Dada Kehinde Abiodun, a Part 1 student of the Department of Crop Science and Horticulture was killed while some others were severely injured and are receiving treatment at the Federal Medical Centre.

“One of the students placed under intensive care has also given up the ghost during the early hours of today.

“Meanwhile, so as to distort the truth before it gets to the public domain, the government quickly rushed to the press and fed them with lies all because they are in possession of the financial capacity to do and undo.

“It is, however, important to note that although we do not have the financial muzzle to contend with you in the media, we shall explore every lawful means to communicate the anti – students attitude of Mrs Fayemi to the world.

“To this end, we have however declared the wife of Governor Fayemi a personal non grata anywhere 50meters of any university campus, as we request her to always keep 50 meters away from all our campuses in the country as she constitutes threat to the lives of our students.

“We are not ignorant of the move of the government to kidnap our comrades when sighted anywhere in the state.

“As a result of this unholy plot by the Ekiti state government, we would protest her wicked act in at least one state from each of the geo -political zones of the country, with effect from Monday 16, September, 2019.

“We however appealed to mothers and other international communities to join force with us to condemn this inhuman act.”

EKSU student kills boyfriend for refusing to give her N2,500 to make her hair