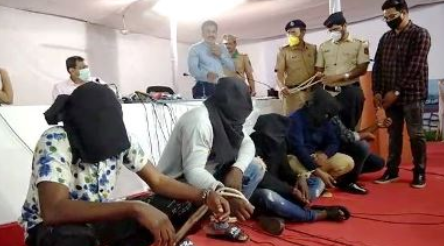 Four Nigerian nationals and one Indian citizen have been arrested for allegedly duping a former Army nurse of Rs 41.70 lakh after befriending her on social media.

They were produced before the court on Tuesday, October 13 and remanded till October 19.

The Nigerians, posing as cloth traders, were allegedly involved in a racket operating in Mumbai in Maharashtra, Kolkata, Delhi and Nagaland.  They had allegedly duped several Indians to the tune of crores of rupees through online fraud.

According to Nagpur cybercrime police, in the latest case, the accused befriended Reena Samsher Singh, 56, on Facebook by using fake profiles and then lured her with a job in Canadian army and offer of lucrative gifts.

One of them claimed to be from the US and told her that he would send her gifts and gold jewellery.

The accused asked her to deposit money in various bank accounts for `releasing’ the goods from the customs.

She then received WhatsApp messages, threatening to implicate her in a money laundering case if she failed to pay. She thus ended up depositing Rs 41.70 lakh in accounts in Vijaya Bank, Canara Bank, UCO Bank and HDFC Bank.

Finally, realizing that she was being defrauded by cybercriminals, she approached the police. The cyber police tracked down the accused from CCTV footage of bank branches where she had deposited the money.

The money received from the ex-Army official was diverted into eight different accounts. Most of these accounts were traced to Delhi resident, Sujit Tiwari, who was the first one to be picked up by the city police team.

Cyber cops, under city police chief Amitesh Kumar and additional CP Sunil Phulari, had frozen the eight bank accounts with a balance of around Rs18 lakhs, seized 13 mobile phones and 18 different credit cards from the gang. Police are yet to trace out the passport and visas of the Nigerian nationals.

A team of only six persons, comprising senior inspector Raghavendrasingh Khirsagar, Asst PI Vishal Mane, head constable Sanjay Tiwari, constable Ajay Pawar, Deepak Chavan and Bablu Thakur had to strive for several days in Delhi to arrest the Nigerian nationals and their local contact Tiwari. One of the Nigerians had nearly slipped away from the cops but was pinned down by the alert team.

It was Tiwari who helped the racket with his bank accounts, Sim cards and other documents to receive the money from their victims. Police managed to trace and nab Tiwari first, from whom details of the Nigerians were mostly gathered.

The police seized 18 credit cards and dozens of mobile phones from their possession. Further probe is ongoing.

I’ll frustrate the Sh*t out of you forever, Omawumi tells hubby on his birthday

This adventure will end some day, James Brown on being a drag queen