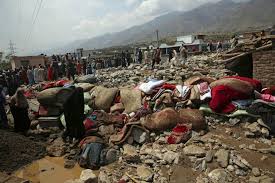 The disaster in Parwan province has wounded more than 250 people, destroyed more than 500 houses and washed away streets in the provincial capital Charikar.

The Afghan National Management Authority and the Defence Ministry have helped 5,000 families with food and non-food aid packages, a spokesman for the agency, Hasibullah Shaikhani, said.

A provincial council member, Mohammad Khalil Fazli, said the speed of the floods caught everyone off guard.

“When people tried to get out of their homes, to escape for their lives, they faced heavy floods that were already filled the streets and roads,” he said.

Another councillor, Aminullah Shakori, said that the high waters rushed into the city from several different locations, destroying everything in its path.

Acting Defence Minister Asadullah Khalid arrived in the province in a bid to help coordinate the rescue operation.
Parwan province is one of the most flood-prone provinces in Afghanistan.

MORE READING!  Girl, 15, shares video of herself smoking weed
Related Topics:Afghanistandeadfloods
Up Next