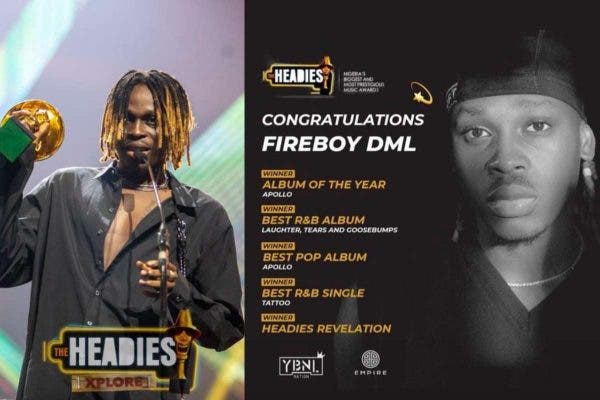 YBNL star, Fireboy DML, has made history at the just concluded Headies award night, as he equalled Wande Coal and Psquare’s record for most wins in a night.

Omah Lay, Fireboy DML and Wizkid all went home with awards in this years edition of the prestigious award.

He beats SARZ & WURLD, PRAIZ, CHIKE and TIWA SAVAGE to the award.

He won the award with his album titled APOLLO.

Fireboy rose again as he claimed the HEADIES REVELATION awards.

He, however, crowned the night by defeating top stars which include Burna Boy, Adekunle Gold, Brymo, and Chike to claim the Album of The Year award.

My mother tried aborting me, but she was warned, James Brown reveals

VIDEO: ‘My own award,’ BBNaija’s Tobi Bakre finally shows off his woman