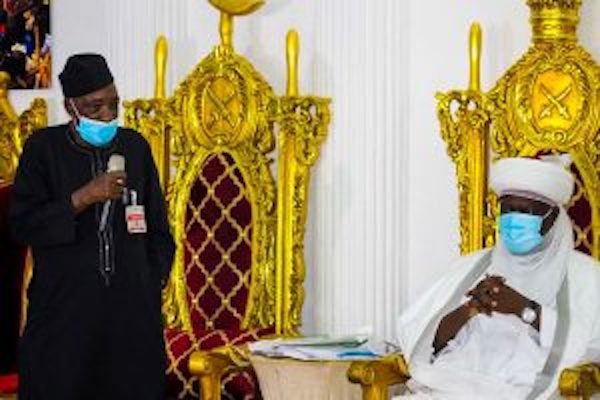 The Federal Government on Saturday pledged to support Kebbi flood victims to mitigate the devastation caused by flooding in the state.
The Minister of Agriculture and Rural Development, Alhaji Sabo Nanono, made the pledge in Argungu during a courtesy call on Emir of Argungu, Alhaji Samaila Mera, to sympathize with flood victims across the state.
Nanono, who was accompanied by Gov. Atiku Bagudu and some Federal and State Government officials, said the federal government was concerned with the massive flood disaster in the state and other parts of the country.
He said he was in the state to holistically assess the extent of damage caused by the flood.
“This is with the view to ascertaining the extent of damages to farmlands, livestock, houses, and other infrastructure. We will also go back to Abuja, compile our report, and submit the same.
”The Federal Government will come to the aid of the victims, including those who have lost their livestocks,” he said.
Nanono urged farmers not to be discouraged, adding that efforts were on to provide early maturing seeds of rice, maize, and other food crops to them.
He said it would reduce the impact of the disasters on food security and losses incurred by farmers.
Nanono said that the state government had contributed a lot towards food security in the country.
He said that the state had a positive effect on food security in the country, adding that the state was now the hub of rice production.
In his remarks, Mera commended the Federal Government for showing concern to the plight of the flood victims in the state.
He also commended Bagudu for showing deep concern and an unrelenting commitment to offering immediate assistance to the flood victims.
On his part, Bagudu said, “being on a downward slope, the state received the brunt of the release of water from Goronyo and Bakalori dams upstream and River Niger by authorities of Republic of Niger.”
Bugudu said that farmers lost farmlands, crops, animals, and fishing ponds while commending them for their resilience and perseverance.
Bagudu expressed appreciation to the minister, the CBN, and the Rice Farmers Association of Nigeria (RIFAN) for coming to the state to sympathize with its people.
The governor affirmed the commitment of his administration to offering the victims the necessary moral and material support to replant.
Earlier, the Chairman of Wheat Farmers Association, Alhaji Abdullahi Argungu, said that the entire Fadama rice fields in the state were submerged by the flood.
”90 percent of the farmlands have been submerged by the floods. Farmers made the largest replanting of rice ever recorded in the state before floodwater washed everything,” he said.
Argungu appealed to the federal government and authorities concerned to provide the farmers with improved seeds of maize, cassava, potatoes, and other varieties immediately for planting.
MORE READING!  Sanwo-Olu gives judges 51 SUVs, eight houses
Related Topics:FederationKebbi FloodVictim
Up Next