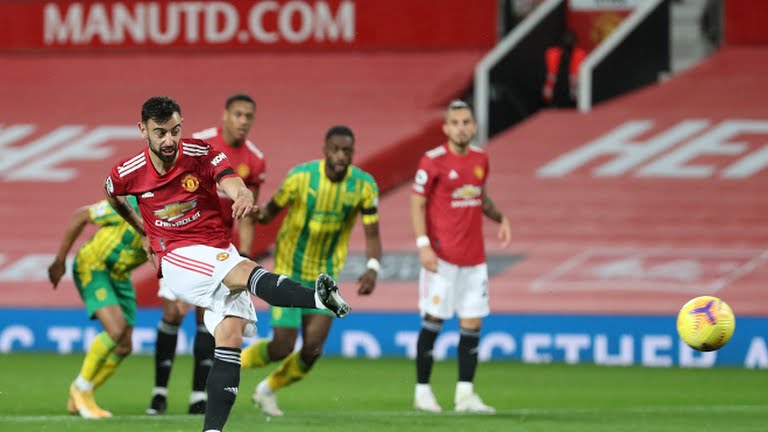 Ole Gunnar Solskjaer’s men go into the game with just one point from four matches at Old Trafford having lost against Crystal Palace, Tottenham and Arsenal, with a goalless draw against Chelsea.

United controlled the game but failed to unlock West Brom’s sturdy defence with their final passes and finish, as they end the first half goalless.

The away team was awarded a penalty at the start of the second half after Bruno Fernandes has contact with Conor Gallagher’s shin in the United box but the referee, David Coote overturned after VAR check.

Another drama involved Fernandes again in the 56th minute but this time in the West Brom box as Mata’s shot found the hands of Furlong in the 53rd minute.

Fernandes, however, squander the penalty with his first try but Johnstone’s save was ruled out for leaving the line before the ball, giving the Portuguese a second chance.

The former Sporting CP man redeemed himself with the second try as Johnstone who guessed right followed the ball in vain.

United’s win would be their first since they defeated Bournemouth 5-2 on the 7th of July, 2020 (towards the end of last season).

Ole’s men now move to 9th position on the table with 13 points, one ahead of 11th placed rivals, Manchester City who lost 2-0 to Tottenham earlier today.