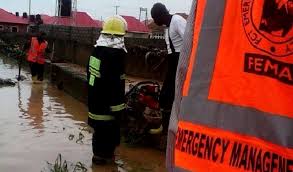 Mr. Abbas Idriss, Director-General, FEMA, gave the warning in a statement on Thursday in Abuja.

He said that torrential rainfall arises due to climate change, which also results in flash floods.

According to him, the flash floods which is one of the dangerous types of flood can come up at any time and sweep people and properties away rapidly.

“There is this attitude that people are fond of doing, which is driving under a heavy downpour.

“Most of the people that have lost their lives are because they refused to listen to early warning messages.

“We keep on telling them to allow the water pass before they drive in because, as a result of the strength of water, just two-centimeter water can sweep away a Sport Utility Vehicle not to talk of a small vehicle.

“I want to plead with them to have an attitudinal change to avert more deaths as a result of floods,” he said.

He added that the agency was working with the National Emergency Management Agency (NEMA) and other emergency stakeholders to address the issue of floodings in the FCT.