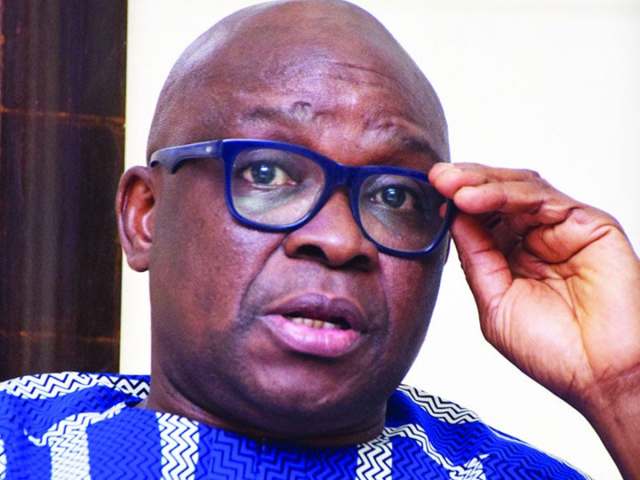 Mr Eddy Olafeso, the immediate past National Vice Chairman of the Peoples Democratic Party (PDP), in South-West on Sunday said ex-Gov Ayodele Fayose remained a critical voice in the party’s affair in the region.

Olafeso made the clarification in Ado-Ekiti during a meeting with the party’s delegates over his Vice Chairmanship aspiration in the coming zonal congress of the party.

He was specifically addressing the Bisi Kolawole-led faction of the party, predominantly Fayose’s loyalists.

It would be recalled that the party’s state congress held on Aug. 22, had produced two factional chairmen.

Fayose was also alleged to have declared Gov Seyi Makinde of Oyo State persona-non-grata in the state having been endorsed as the PDP leader in the South-West by Olujimi’s faction.

Olafeso said Fayose should be respected for saving the party from total ruin when the ruling party allegedly plotted an internal crisis to destroy it.

According to him, Fayose towers above other leaders in the zone judging from his antecedents and contributions to the PDP’s electoral fortunes.

Olafeso described the leadership tussle between Fayose and Gov Makinde of Oyo state as uncalled for and unwarranted, saying ex-Gov Fayose was a pathfinder and leading light of the PDP in the South-West.

“He remains the voice of the PDP in the Southwest.

“You can see that all the immediate past zonal executive members are represented here.

“We are here to thank our leader, Ayodele Fayose for his support.

“He (Fayose) is our leader. We believed in him. While others were panicking and fearful to criticize President Muhammadu Buhari, he was with us.

“He remained the only voice in the wilderness.

“Fayose rescued the PDP from those who wanted to ruin the party when the late Sen. Buruji Kashamu took the party to court.

“It was Fayose as a governor that saved the party from total ruin.

“We are very sure that we will reposition the PDP in this zone. We have visited the other five states. No individual can appropriate the PDP in the Southwest.

“Let us continue to support Fayose. We are very sure of victory and unity in the end,” Olafeso, a former Commissioner in Ondo State added.

The Zonal Vice Chairmanship aspirant promised to initiate a peace process that would bring all the contending forces together in line with the dream of the PDP’s founding fathers.

“We don’t have a major crisis, what we have is disagreement. Some leaders had even begun underground fence-mending mission, but peace is a process.

“We will lead with fairness and justice in partnership with other leaders to ensure that we take our rightful position at the national level,” he said.

Bisi Kolawole, the PDP factional Chairman in Ekiti, in his response, promised that the state chapter of the party would support the return of Olafeso as zonal Vice Chairman.

Related Topics:fence mending
Up Next