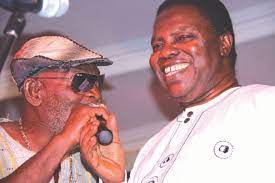 To date, many highlife buffs in Nigeria believed Obey was the late music icon introduced and mentored Obey in the art of music, a claim the latter has refuted repeatedly.

Prior to meeting Dollar, Obey disclosed that he had already cut his teeth under the tutelage of some popular names in the industry.

“I will like to reveal the truth of the matter. God actually used me to discover my boss. You know God has His own way of doing things. Fatai Rolling Dollar happened to be someone who was playing with J. O. Araba and His Afro Skillful Band. God had given me the talent of composition; compose any kind of music. I also composed for J. O. Araba, but my mentor at that time was Adeolu Akinsanya. Then, my mentor was not playing high-life, he was playing what we called Agidigbo Mambo Orchestra and the name of the band was Adeolu Akinsanya Reo Lindo Mambo Orchestra. You know, not many artistes had the opportunity of recording and releasing music in those days. But Adeolu Akinsanya was opportuned, so I knew all his songs and I used to compose the same way he did, and as my mentor, I always took my songs to him and he always encouraged me,” he said.

According to Obey, he even had the privileged of getting his song ‘Outside Kingsway mori sisi kan…’ recorded under Akinsanya.

“He even took permission from to record one of my songs… ‘Outside Kingsway mori sisi kan…’ I was glad and felt honoured. So, Fatai Rolling Dollar was playing with J. O. Araba, and I passed through the tutelage of Akinbomi Savage and Bamgbose Abengo Mayana. They were two old people. One day, I was sitting in front of my father’s house in Mushin, I saw them pass and I followed them, but they didn’t know I followed them. They stopped when they got to Olumorogun street and I heard them saying they needed an amplifier tomorrow. I then told them that I would take them to where they could get it and they turned and were amazed that I was behind them. They asked me, ‘you this boy are you an angel?’ and I replied that I had been following them since they passed by my father’s house. I told them that I am also a musician and I took them to where they rented the instrument,” he stated.

Now an Evangelist, Obey revealed how much he earned as a young outgoing musician then.

“They later asked me the musical instrument I could play and I responded that I could play all instruments. They asked further if I could play Agidigbo and I said yes, so, I followed them to the engagement. At that time, my salary was 3 pounds monthly, but I was paid 1 pounds 17 Shillings; that was close to my salary in one day, yet they told me that I had not seen anything yet. That I would join them and be paid every day, so, that was what happened. It was during the course that I wanted to know the person that played the Agidigbo in the record of J. O Araba. I was so determined to meet with the person because the instrument was tasking. I asked one of my mentors and he said it was Rolling Dollars and I eventually met him and I told him that Agidigbo was too difficult for me to score well.

“He then asked me how many fingers I used and I said two; he replied that he played with five fingers; I was amazed because I had never seen anyone who played the instrument with five fingers. I told him that I would like to know his place. On that day, he hung a box guitar on his neck and I followed him to Paul Oguntola where he was living.

“Before we got to his house, I composed five songs to the guitar he was playing, the first song I composed for him was: ‘Ode to dori kodo to n so Eledumare ori egun lo ma ku si (2ce) Eba da pan pa, ke tun fa ko yo, eyi to Oluwa o se fo fi yen da, eda lalaropin ye o, kadara koni ta se.’ Rolling Dollar was so amazed and he said I should sing it one more time. He also escorted me back home while singing and I told him my address; 7, Abolade Street, Mushin, Lagos, and that was how we became friends. I was already a professional and talented musician before we met. I was never an apprentice under him,” he stated.

Spend time with people that add value to you – Tonto Dikeh