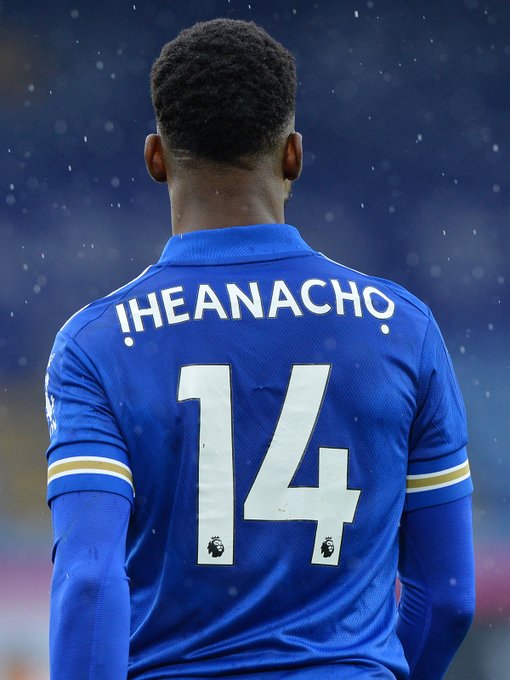 Super Eagles striker, Kelechi Iheanacho, has caused a division among his fans on social media following a recent statement highlighting his affiliation to the Igbo culture.

The Leicester City forward has been in blistering form for the Premier League side, helping them remain third on the log as well as firing them into the FA Cup final against Chelsea.

Together with his compatriot, Wilfred Ndidi, who nicknamed him, ‘Seniorman Kelz’ Iheanacho has brought nothing but pride to Nigeria and his tribesmen having endured a difficult few seasons at the King Power when he switched from Manchester City.

Ahead of this weekend’s Premier League clash against Newcastle United, Iheanacho took to Twitter to repost a picture of his jersey initially tweeted by Leicester City but with the caption, “FOR THE IGBO CULTURE.”

Spelt “ỊHEANACHỌ” with two distinctive dots (punctuations of the Igbo tribe) underneath the first and last letters on the Foxes’ jersey, the family is translated thus: “What We Habe Been Looking For” and the player noted that “In our tradition, the exclamation under the names is very, very important.”

However, his latest comment has earned him backlash from some non-Igbo supporters who felt he should have declared as a Nigerian man and not just an Igbo man.

A fan, @Ahmadcheirry wrote: “We made you” referring to Nigeria, while another tweep – @omogbolahan_03 supported him saying  “Not only for the IGBO for Nigerians culture.”

A certain @KiddyYusuf added that “Man (Iheanacho) had a chance to say Nigeria.”

But in defence of the 24-year-old who was born in Imo State, some fans rebuked his critics.

@ReddGhost argued that “Israel Adesanya wins fight and reps the Yoruba culture. Anthony Joshua wins and does same, but kelechi repping ndi Igbo is a problem for some people. Aswear some of una dey gbogbolo cigar oh. Whutt???!!”

Another user, @Austinpapz noted that the “Comments here actually makes me laff honestly, Isreal Adesanya/ Anthony Joshua they constantly rep the Yoruba culture steady, it sat well with most of u guys, e don reach “Senior Man Kels” turn u guys have tagged him a tribalistic fellow.. really appalling.”

@Iam_kristenT noted that “The level of bigotry in the comment section of this posts is screaming to the high heavens.  Fgs, Anthony Joshua professes his identity and we love him more for it. it seems this is now becoming a pattern and must be resisted by all Igbos and people of good conscience.”

Iheanacho is currently on 10 goals in the league, five more than he scored for Brendan Rodgers’ side in the Premier League last season (five).

With 14 goals in his last 14 appearances for Leicester in all competitions, Iheanacho is could end the season as Leicester’s top scorer with 17 goals presently. It is the first time since 2014-15 that Jamie Vardy would be behind on the club’s top scorer’s chart.

Only Harry Kane (18) has been involved in more goals than Iheanacho (15) among Premier League players in all competitions this year.

His form this season has also seen him regained the trust of Nigerians after bursting into the scenes at the 2013 FIFA U-17 World Cup when the Golden Eaglets defeated Mexico 3-0 in the final.

Iheanacho scored six times, including one in the final, and provided seven assists, earning him the Golden Ball award for player of the tournament.