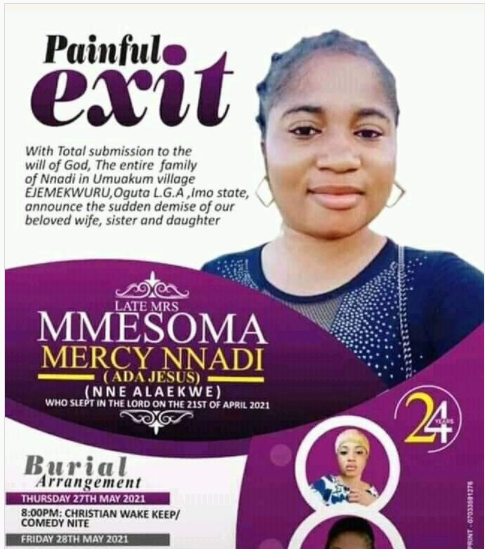 The family of late Ada Jesus has released the burial rites of the internet comedian and actress born Mmesoma Nnadi.

According to the poster shared by the family, a Christain wake keep and comedy nite will be held on Thursday, May 27, and she will be laid to rest in Oguta, Imo state on Friday, May 28.

The comedian died on Wednesday, 21 April after experiencing a cardiac arrest the day prior.

The 22-year-old had marked her birthday a day before she lost the battle on Wednesday, April 21.

WuzupNigeria reported that late Ada Jesus was admitted to the hospital after she developed kidney disease.

When her health condition took a twist, she publicly sought forgiveness from those she had spoken against in the past. With the support of Nigerians, she was admitted into a hospital where she started undergoing dialysis.

Her health began to improve until she experienced a heart attack, the night of her 22nd birthday.