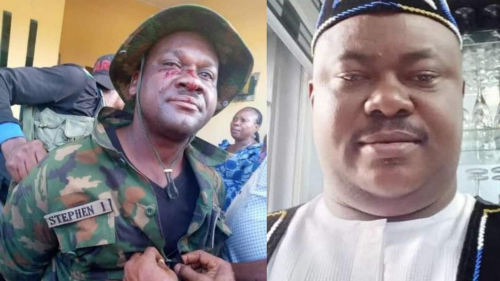 Following the murder of an Akwa Ibom man identified as Enobong Jimmy by a suspected military officer, his family has demanded that justice be served.

Reports revealed that the deceased who offered the Army officer a lift was shot by the officer and left with several dagger wounds on his chest before stealing his vehicle.

Jimmy who hailed from Ikot Obio Akai in Mkpat Enin Local government area of Akwa Ibom state was said to have encountered the soldier on his way from Eleme, in PH, to Mkpat Enin LGA, to see his family.

After dumping Jimmy’s body by the wayside, the unnamed soldier was tracked and arrested by the operatives of the Ikot Abasi division with his vehicle at Ukanafun LGA.

Speaking on behalf of the family on Wednesday, Jimmy’s brother – Mr Idorenyin Ikpongeyen,  appealed to the Federal government and the Nigerian Army to ensure that justice is served noting that the military must follow up the case to a logical conclusion to serve as a deterrent to others.

Ikpongeyen also called on Nigerians to join voices so that justice is duly served.

He lamented that the deceased who was on his way to visit his family members in Mkpat Enin Local Government Area of Akwa Ibom State, left behind a very young family, as his last child is just a year old.

“It is very painful that we had to lose our brother to the hands of an ungodly Nigerian military personnel, all because he wanted to steal or reap from where he did not sow.

“I beg the Federal government, the Nigerian Army and the general public to help fight this fight for us, I beg the Nigeria government to bring justice to the one who murdered my brother, leaving his two kids and a wife behind”. he said

Jimmy was a staff of the Eco Clearing & Forwarding Company, Port Harcourt until his death.

He left behind a wife and two young daughters, aged eight and one respectively.