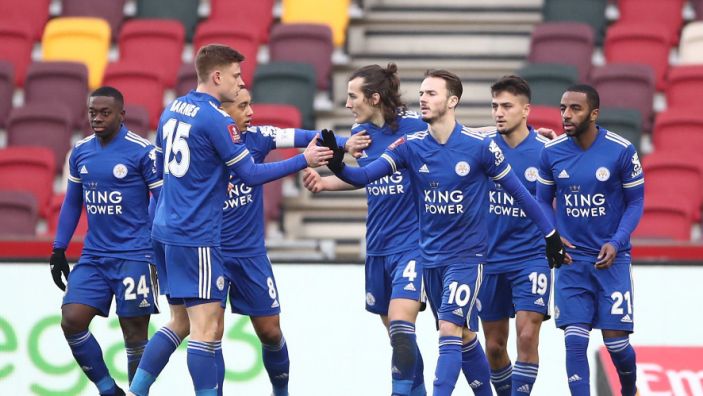 Leicester City booked their place in the fifth round of the FA Cup on Sunday after securing a 3-1 win over Championship side, Brentford.

The Bees stung The Foxes in the 6th minute for failing to deal with a corner kick which was tapped in by Danish defender Mads Bech Sørensen.

The home side kept the lead for the entire part of the first half but Brendan Rodgers’ men got back in the game Cengiz Ünder in the opening minute of the second half.

The Foxes took the lead for the first time in the match five minutes later after ref awarded them a penalty which was calmly converted by Youri Tielemans.

Leicester who were without their star striker, Jamie Vardy, who recently had hernia surgery, completed the rout in the 71st minute through James Maddison.

Since returning to the Premier League in 2014, Leicester have now reached the FA Cup fifth round in five of the previous six seasons, failing only in 2015-16 and 2018-19.
Brentford remain winless after eight meetings with Leicester in all competitions (D1 L7), most recently a 0-1 home loss at this stage of the FA Cup last season.
MORE READING!  Wolves 'confident' of Jimenez's return before end of campaign
Related Topics:brentfordFA Cup4Leicester
Up Next