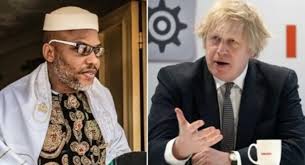 The United Kingdom has demanded that the Nigerian Government explains how the leader of the Indigenous People of Biafra, Nnamdi Kanu, was arrested and repatriated to Nigeria.

This was disclosed by Tariq Ahmad, a junior minister at Britain’s Foreign Office, according to Reuters.

“We are seeking clarification from the Nigerian government about the circumstances of the arrest and detention of Nnamdi Kanu,” Ahmad said.

WuzupNigeria reported that Kanu who holds a dual citizenship status with Nigeria and the UK was recently rearrested and extradited to the country via an unverified means having jumped bail in 2017 and fled to the United Kingdom, facing terrorism-related charges.

He is currently being held by the Department of State Services after appearing before Justice Binta Nyako of the Federal High Court, Abuja, and is facing trial for a treasonable felony.

WuzupNigeria had also reported that Kanu was denied access to seek help from the British Government.

There has been a lack of clarity from the Nigerian Government about the means of his arrest as the UK and Kenya have both denied working with the Buhari regime to facilitate his arrest.

Subsequently, Kanu’s lawyer,  Ifeanyi Ejiofor, alleged the IPOB leader who was brought to court in Abuja on June 29 had been detained and mistreated in Kenya before being sent back to Nigeria.

The IPOB leader’s case is due to resume in court in Abuja next week.